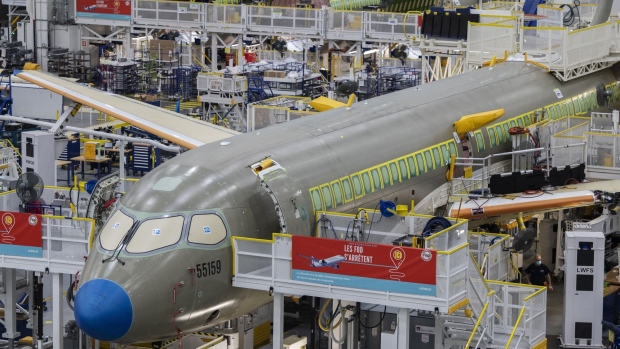 An Airbus A220 at the Airbus Canada LP assembly and finishing site in Mirabel, Quebec, Canada, on Wednesday, Nov. 17, 2021. Air Lease Corp. is seeing demand for single-aisle jets like Airbus SE's A320neo and A220 families outstrip the planemakers' current rates of manufacturing. , Bloomberg

(Bloomberg) -- Ukraine signed an outline deal for a mix of single-aisle and wide-body jetliners from Airbus SE as part of the government’s plan to establish a new airline.

The memorandum of understanding concerns cooperation on the creation of a national carrier, including the acquisition of aircraft, the office of Ukrainian President Volodymyr Zelenskiy said in a statement Thursday.

The accord covers the purchase or lease of 18 narrow-body jets, comprising six A220s and 12 A320-family planes, together with four bigger A330 or A350 twin-aisle aircraft used on longer routes, the Interfax news service said. The pact could extend to collaboration between Airbus and Ukraine’s aerospace industry.

Ukraine is pressing ahead with moves to found a state airline after Zelenskiy said the country was too reliant on private carriers in repatriating citizens at the start of the coronavirus crisis. The new operator would compete with Ukraine International Airlines, which is owned by billionaire Igor Kolomoisky and operates a fleet dominated by Boeing Co. models.

Kimon Sotiropoulos, Airbus’s sales chief for central Europe, said flying from scratch with new technology means the airline will start with a low carbon footprint. The manufacturer declined to comment further on the deal.