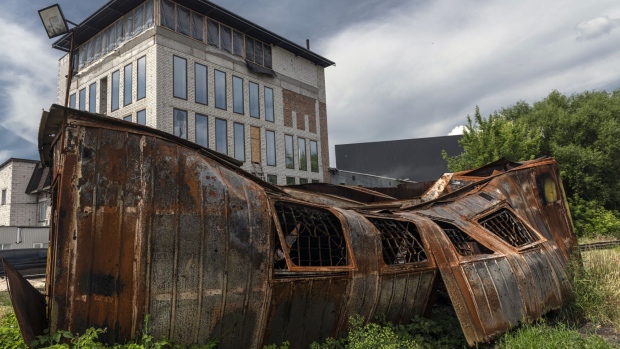 There are no agreed guidelines for measuring the climate impact of military activities. Photographer: Andrey Rudakov/Bloomberg , Bloomberg

(Bloomberg) -- Ukraine is taking its fight to repel the Russian invasion to the climate arena with demands that aggressors be forced to pay for greenhouse gas emissions caused by war. Weapons manufacturing and military vehicles running on fossil fuels generate significant emissions of planet-warming gas, even in times of peace. Missiles and bombs kill people but also disrupt power generation, destroy infrastructure and contribute to the warming of the atmosphere, while Russia’s decision to cut gas supplies into Europe has prompted a scramble for fossil fuels.Ukraine President Volodymyr Zelenskiy used his address to leaders at the COP27 climate talks in Egypt to call for the creation of a platform to assess the impact of war on the climate and environment — and ensure the right party is held accountable.  “We are all thinking about how to generate hundreds of billions of dollars to help developing countries protect themselves from the climate change,” Zelenskiy said. “Under these conditions, how can anyone cause additional, insane damage to nature with their invasive military ambitions? Such ambitions deserve only punishment.”

Military activity during both peace and war could account for about 5% of global greenhouse gas emissions, more than aviation and shipping combined, according to preliminary estimates cited by social justice non-profit Tipping Point North South during an event on the sidelines of COP27. Now in its eighth month, the war in Ukraine has taken a particularly big toll this year. More than 6,400 people have died and over 9,900 people have been wounded, UN figures show. At the same time, close to 100 million tons of carbon dioxide equivalent have been emitted, according to research compiled by the Initiative on GHG Accounting of War, led by Ukrainian researcher Olga Gassan-Zade.

The figure includes emissions generated from the movement of refugees, fires, warfare, leaks on the Nordstream gas pipeline and reconstruction. All combined, the war’s footprint — so far — is equivalent to the annual emissions of Bangladesh or Colombia, according to data from the Global Carbon Project. Researchers are calling for better accounting of military emissions in times of peace and during wars. They also want accounting rules for these emissions so they are attributed to invading countries, like Russia, even if they are generated in the invaded territories. “These are very preliminary numbers, but the biggest impact on greenhouse emissions will be the rebuilding effort,” Gassan-Zade said. “We are calling for a framework that can attribute emissions correctly — emissions in Ukraine were not caused by the country, they were caused by aggressors.”Ukraine’s call has trained the spotlight on a particularly obscure corner of emissions accounting because the secrecy that often surrounds defense activities makes it difficult to track their impact on the planet.

The UN Framework Convention on Climate Change currently has no guidelines on how to report on direct or indirect emissions from the military, so any estimates are very approximate, said Axel Michaelowa, a head of research at the Institute of Political Science in Universität Zürich, who co-authored one of the few papers on the issue in 2001. “This is a field of significant emissions and no one has really dealt with this properly,” Michaelowa said. At the COP27 gathering, Ukraine is seeking to draw attention to the environmental consequences of the conflict with an exhibition space — its first ever at a climate conference. Painted in sober gray to reflect the bleakness of war, an artistic installation at its center is shaped like a shell casing filled with soil samples meant to represent the lost potential of a country that was once the breadbasket of Europe.

The war in Ukraine has also severely hindered the country’s green energy projects, said Maxim Timchenko, Chief Executive Officer at Ukraine’s biggest private power producer DTEK. Ukraine has lost about 90% of its wind capacity, which is located in areas now occupied by Russia. About 30% of its solar capacity was destroyed in the fighting, he said, and long term repairs to the grid will cost billions of dollars.  In the meantime, DTEK is rationing power and relying on coal this winter — it has more than 1 million tons stockpiled.

“The Russian war has brought about an energy crisis that has forced dozens of countries to resume fire-powered coal generation,” Zelenskiy said. “There can be no effective climate policy without peace.”