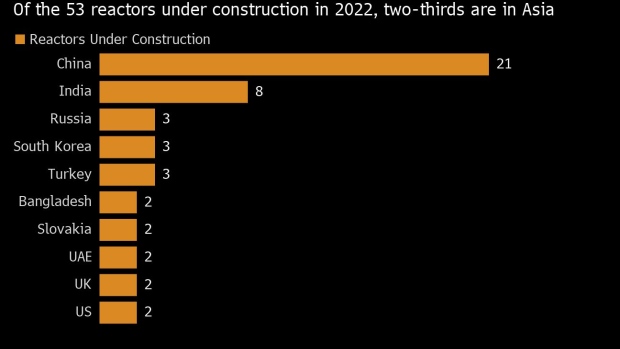 (Bloomberg) -- The Russian army’s seizure of the biggest nuclear power plant in Europe isn’t just exposing Ukrainians to the risk of an atomic accident but may also undermine plans to install new miniature reactors in far-flung places.

Months of shelling and rocket attacks against the Zaporizhzhia Nuclear Power Plant are revealing vulnerabilities that power utilities haven’t historically been forced to consider. Engineers typically design reactors to withstand storms, earthquakes or plane crashes but until now haven’t factored war into their calculations.

“No nuclear power plant in the world has been designed to operate under wartime conditions,” said Mycle Schneider, the lead author of the World Nuclear Industry Status Report published Wednesday. “Nuclear power plants are immediately vulnerable.”

International Atomic Energy Agency monitors have reported dozens of attacks at Zaporizhzhia, where strikes sporadically cut power and water supplies, forcing a plant that would normally generate a fifth of Ukraine’s electricity into shutdown. The station’s resilience is being closely monitored by a nuclear industry that’s working on a new generation of small-modular reactors, or SMRs, to replace the world’s aging fleet of traditional plants.

SMR manufacturers, including NuScale Power Corp. and the Bill Gates-backed TerraPower LLC, say their machines will be cheap and quick to deploy. There are about 80 unique mini-reactor designs in development around the world, with some vendors promoting SMRs as solutions for remote, frontier towns in need of power.

“In theory, we’re talking about thousands of units that would need to be installed in order to have an impact on electricity markets or climate change,” Schneider said in an interview. “But if you multiply units, you’re also multiplying potential targets.”

The 2022 edition of the status report dedicates a chapter to the new threats exposed by Russia’s war on Ukraine. The annual publication is written by top nuclear researchers from around the world and prepared with funding by the the US MacArthur Foundation and Germany’s Heinrich Boell Stiftung.

“The higher the nuclear share, the more difficult to shut down all reactors as a precautionary measure in case of war,” reads the 385-page report. “Physics do not change under wartime conditions. If a core meltdown is triggered by the impact of weapons on the reactor building, more radioactivity is likely to escape because a damaged reactor enclosure cannot fulfill its intended containment purpose.”

“Even if structures are extremely well designed, you cannot expect them to withstand a military-style attack,” said Aybars Gurpinar, a former IAEA director of nuclear safety. “They are not designed for this.”

While the US Department of Defense has awarded funds to BWX Technologies, X-Energy LLC and Westinghouse to explore the feasibility of tractor-trailer sized SMRs that are battle hardened and could be deployed in combat zones, most designers aren’t factoring in military risks. Forcing engineers to reconsider safety issues caused by war could further tax the economics of the technology.

“Because SMRs have been and will be, like large reactors, subject to delays and cost overruns, there is no identifiable scenario under which they could become economical under these circumstances,” said Schneider. He predicts nuclear power will continue to grow among Asian nations while slowly losing ground to solar and wind energy in Europe and the US.