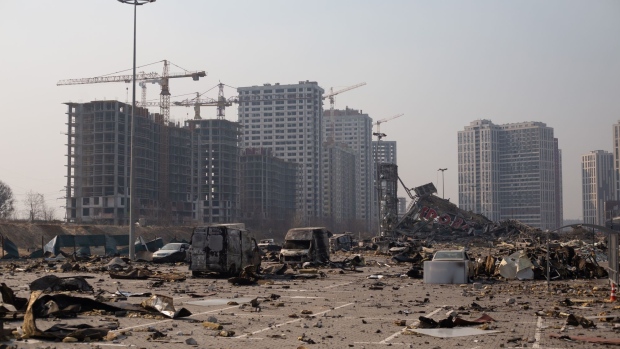 KYIV, UKRAINE - MARCH 23: The site of a rocket explosion where a shopping mall used to be on March 23, 2022 in Kyiv, Ukraine. The rocket hit the shopping mall on March 20, 2022. As Russia's advance on Kyiv has largely stalled, the Ukrainian capital has continued to be hit by missiles and shellfire. More than three million people have fled Ukraine since Russia launched its large-scale invasion of the country on Feb. 24. (Photo by Anastasia Vlasova/Getty Images) , Photographer: Anastasia Vlasova/Getty Images Europe

(Bloomberg) -- Ukraine’s central bank is considering a return to regular monetary policy decisions as soon as next month in a sign the country is getting its financial system back on its feet after a shock from Russia’s invasion.

Interest rate decisions were suspended in the aftermath of Russia’s February attack, which devastated Ukraine’s economy and spurred inflation. In its last decision from January, the central bank raised Ukraine’s key rate by 100 basis points to 10%.

The central bank may decide on a new level of the benchmark in June or July, with a decision in July looking more likely, three people with knowledge of discussions at the central bank said. They spoke on the condition of anonymity as the talks are private and the final decision hasn’t been made yet.

According to the bank’s pre-war schedule, its upcoming rate meetings were to be held on June 2 and July 21. When the rates decisions were suspended, the central bank said regular policy sessions would resume once the economy normalizes.

The war with Russia appears to be entering a protracted phase and Ukraine’s economy requires calibrating, the officials said. An increase in the key rate would ease pressure on the hryvnia amid high demand for foreign currencies from Ukrainian importers and individuals, one of them said.