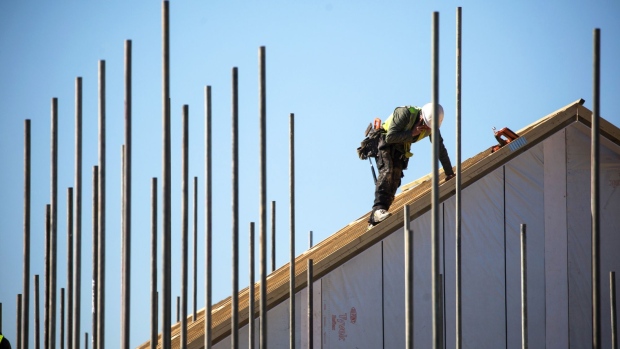 An employee works on the roof of a residential property under construction on a building site in Harwich, U.K., on Wednesday, March 25, 2020. Construction workers have been going to work on project sites as normal and packed London Underground trains prompted concerns that passengers will be spreading the disease. Photographer: Chris Ratcliffe/Bloomberg , Bloomberg

(Bloomberg) -- Michel Andre Heller is looking to lend when credit is tight.

The London-based real estate adviser to a billionaire family from the Middle East is lining up deals of as much as 5 million pounds ($6.2 million) for U.K. residential developments and more than double that amount alongside other investors for bigger properties, such as hotels or offices.

The private debt market “is more than trickling along for us,” Heller said. “From a family office perspective, you don’t want to take on too much risk, but you still want to deploy capital.”

“We have seen a lot of clients saying, ‘Where should I invest if I want to be in the debt market?’” said Luigi Pigorini, region head for Europe, the Middle East and Africa at Citigroup Inc.’s private bank.

Yields on risky and private debt surged during the pandemic, and a March survey of investors gave the most pessimistic outlook on defaults since the 2008 financial crisis. Markets recovered in April, and yields on junk-rated U.S. bonds have dropped to about 8.1% from a peak of 11.7% at the end of March. That remains elevated, though, and there remain areas of extreme distress in energy and retail signaling potential defaults.

That may deter some investors, but few have longer horizons than family offices, which aim to grow fortunes across generations and have fewer constraints than institutional firms. The number of family offices active in private debt has more than doubled since 2015, according to research firm Preqin.

“Family offices were quick to acknowledge the extent to which asset class risk premia had increased,” in the wake of the pandemic, Jean-Damien Marie and Andre Portelli, co-heads of investments at Barclays Plc’s private bank, said in a written reply to questions. “They have been active in both liquid and private credit.”

Those lending privately often focus on real estate, with property developers turning to family offices for extra flexibility and faster access to cash than with most banks. In return, family offices typically get the security of an asset-backed loan that provides consistent cash flow from interest payments.Like other lenders, they can also take control of the asset if the borrower defaults on a loan, and a minority of wealthy families in this scenario have then kept homes they’ve financed for personal use, said Paul Welch, the founder of largemortgageloans.com.

“The first question for some families when they lend is: Do we want to own the asset?” he said.

Wealthy investors active in private debt include former Los Angeles Dodgers owner Frank McCourt and British billionaires Simon and David Reuben, who finalized a private loan in February for the Apthorp, an apartment building on New York’s Upper West Side.

“We’re still looking to lend and we’ve got the internal family capital available to do so,” said Avamore Capital co-founder Michael Dean, who helps to fund the U.K. lender through his family’s investment firm. But “we’re not going to have the same degree of flexibility as we would usually.”