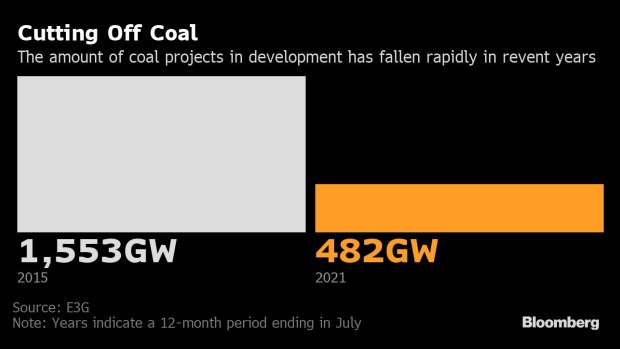 (Bloomberg) -- Seven countries have signed a pledge to stop building new coal power plants initiated by the United Nations, which aims to gather more signatures before the global climate summit COP26 in Glasgow next month.

The No New Coal agreement is the latest attempt to try and piece together a global phase-out of the dirtiest fossil fuel. UN Secretary General Antonio Guterres wants to end the pipeline of new plants this year, while COP26 President Alok Sharma has said his goal for the summit is to “consign coal to history.” Chile, Denmark, France, Germany, Montenegro, Sri Lanka and the U.K. signed the latest pledge.

“Moving away from coal is not a death knell for industrialization, but rather a much better opportunity for green jobs,” said Damilola Ogunbiyi, chief executive officer of the UN-backed international organization Sustainable Energy for All. That’s “what will drive other countries to join,” she said.

A separate initiative launched in 2017, called the Powering Past Coal Alliance, sets a higher bar. It includes 41 countries that have committed to phasing out existing coal operations as soon as 2030 in many cases, on top of promising not to build new plants. An additional 40 nations outside the alliance don’t have a single coal power plant in the pipeline, according to environmental think tank E3G.

That means more countries were ready to commit to not building new coal plants, but not all were ready to phase out existing operations. The No New Coal pact adds a missing step in the ladder for such nations by allowing them to make an easier pledge in the hope that it will ultimately accelerate the end coal.

In the run up to COP26, a number of such voluntary alliances are being created. Last week, the U.S. and European Union launched the Global Methane Pledge that aims to reduce emissions of the super-warming gas by 30% within a decade. Last month, Denmark and Costa Rica launched the Beyond Oil and Gas Alliance seeks to end the extraction of oil and gas by midcentury.

The patchwork of alliances targeting dirty sources of energy or specific greenhouse gases are a far cry from the systematic, orderly energy transition that the world needs. Rather, it’s an acceptance of the political reality of climate diplomacy that has to accommodate countries’ different stages of development.

Burning coal for electricity generation contributes to about a third of the world’s total carbon-dioxide emissions. With cleaner sources of power, such as solar and wind, becoming cheaper to build and operate, the case for ending coal keeps getting stronger. All emissions from coal power plants should end by 2040 if the world is to keep warming below 1.5 degrees Celsius, according to the International Energy Agency.

The No New Coal pact got a boost before its launch, with President Xi Jinping telling the UN general assembly this week that China will stop building coal power plants abroad. He didn’t provide details, but the announcement could mean an end to about 40 gigawatts of new coal power plants. That would avoid as much as 235 million tons of emissions, according to Global Energy Monitor. Xi’s pledge came after similar commitments from the only other remaining major financiers of overseas coal power plants — Japan and South Korea — earlier in the year.

“China’s decision is pretty much the end of public financing for coal,” said Chris Littlecott, associate director of fossil-fuel transition at E3G. “Private investors now face all of the risks of investing in coal on their own.”

The pipeline of new coal power plants has collapsed globally over the past decade. Since 2015, the world has canceled 1,175 GW of coal power plants—about the same size as China’s existing coal fleet, according to E3G—and thus avoided billions of tons of carbon dioxide that would have been dumped annually.

The No New Coal pact is a big step for some signatories. “Sri Lanka has been debating whether to build new coal plants for a few years,” said Christine Spearer of Global Energy Monitor, which tracks coal power plants globally. “If countries like Pakistan and Malaysia join, then we can really start to see the end of new coal plants.”

Still, there won’t be a significant reduction unless China, which is home to more than half of the world’s pipeline of new coal power plants, stops using the fuel. Xi didn’t address the domestic issue in his remarks to the UN.