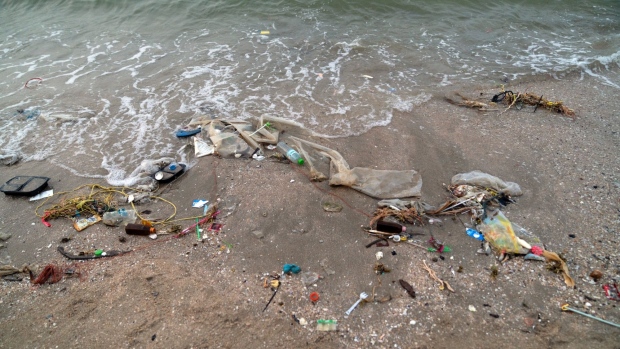 Trash sits along the shore at Bangsaen beach in Chon Buri, Thailand, on Sunday, Jan. 19, 2020. Thailand's love of plastic bags helped make it the sixth-worst maritime polluter. The country generates more than 5,000 metric tons of plastic trash a day, three-quarters of which ends up in landfills. Photographer: Nicolas Axelrod/Bloomberg , Bloomberg

In the shadow of the relentlessly heartbreaking news about Russia’s war on Ukraine, a glimmer of hope for the potential for world diplomacy came out of Kenya last week.

At the fifth biennial session of the United Nations Environment Assembly, which met in Nairobi, 175 countries agreed to establish an intergovernmental committee to negotiate a legally binding treaty to tackle the proliferation of plastics.

Plastic is, of course, a global scourge. About 11 million metric tons of plastic waste end up in bodies of water each year, and the UN expects that volume to nearly triple by 2040. Not only do plastics clog oceans with waste, they break down into tiny pieces — microplastics — that threaten human and animal health.

Delegates in Nairobi resolved to cut plastic waste through recycling, sustainable package design, and limiting production of virgin plastics in the first place. Further, they pledged to have a treaty in place by the end of 2024. That’s an extremely fast timeline: Most global treaties take five to 10 years.

Agreeing to start negotiating might seem like small potatoes. But in the realm of international environmental diplomacy this is actually a significant step forward, said Simon Reddy, who directs the Preventing Ocean Plastics initiative at the Pew Charitable Trusts, a global non-governmental organization. “I don’t think we’ve seen so much momentum behind a desire to act since the ozone issue in the late ’90s,” Reddy said.

Others have said that if the treaty is completed it will rival the Paris Agreement, the 2016 accord which binds nations to targets to reduce greenhouse-gas emissions.

Virginijus Sinkevicius, the European Union’s commissioner for environment, oceans and fisheries, called the adopting of the resolution by full consensus of all the delegates present “a celebration saddened by the act of aggression.”

Both Russia and Ukraine sent delegates to the meeting, which became awkward as the week progressed, to say the least. At the beginning, Russians were “very active” in the proceedings, said Bjorn Beeler, a coordinator for the International Pollutants Elimination Network (IPEN), which connects environmental organizations across 128 countries. But by the end, many other delegates were wearing blue and yellow clothing in support of Ukraine and the Russians were “sort of sidelined,” Beeler said.

Russia’s ongoing cooperation is not incidental to a meaningful treaty. Plastic is a petrochemical product, and plastics production in Russia increased by 64% over the last five years, according to a report that IPEN put out last month. The same report also concluded that Russia, China and Indonesia have used toxic chemicals to make plastics — some of which were falsely labeled as toxin-free — and that all three countries struggle to handle their huge plastic-waste streams.

The next step toward a treaty will be an ad-hoc convening of nations that will decide the rules of the negotiation (for example, setting a definition of plastic). There are a lot of heavy meetings ahead.

“We can’t forecast Russia’s relationship with the international community and what effect it will have on multilateral agreements,” said Beeler, “but here in Nairobi the global community is proving that it is moving forward either way.”