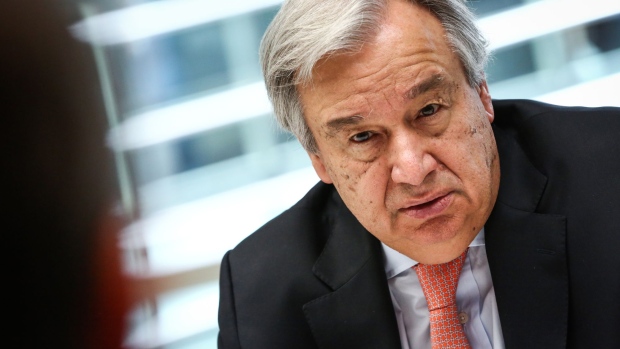 (Bloomberg) -- The head of the United Nations challenged member states and the global body’s own agencies to step up climate goals, saying current targets are far too lax.

Targets set forth for shipping and aviation aren’t aligned with the goal of limiting global warming to 1.5 degrees Celsius set at the 2015 Paris Agreement, UN Secretary General Antonio Guterres said at a conference in Beijing.

“In fact, they are more consistent with warming way above 3 degrees,” he said. A new set of more ambitious and credible targets “must be an urgent priority” for the UN’s International Civil Aviation Organization and International Maritime Organization in the coming months and years, he said.

Keeping global warming to 1.5 degrees will stave off some of the worst effects of climate change. At 3 degrees, many glaciers and ice caps would melt, boosting sea levels and engulfing low areas. Deserts would grow and storms would become more violent, leaving more areas uninhabitable.

Today, both shipping and aviation are almost exclusively powered by oil and are seen as difficult sectors to decarbonize. While alternative fuels and propulsion technologies are currently being developed, their widespread commercial adoption is still many years away.

The IMO, shipping’s UN regulator, is currently targeting a 50% cut in annual greenhouse gas emissions from the sector by 2050, although the industry has called for a goal of net-zero carbon by then. The aviation industry’s main lobby group IATA has adopted the same net-zero target, while ICAO’s current plan calls for carbon-neutral growth from 2020.

The UN agency for shipping currently has 174 member states, while the one for aviation has 193. These agencies do not have authority over national governments, according to ICAO’s website.