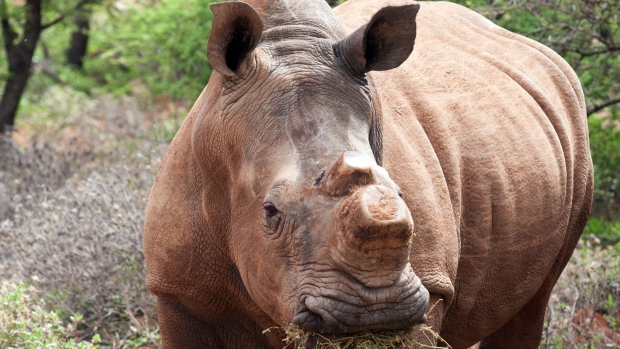 A white Rhino grazes in the scrubland on a game reserve in Limpopo Province, South Africa, on Sunday, Dec. 18, 2016. VETPAW provides employment to post-9/11 United States veterans, using their skills to train park rangers, local anti-poaching units and to prevent the extermination of African wildlife. , Bloomberg

(Bloomberg) -- The United Nations is backing biodiversity credits as a way to boost conservation financing, but critics warn the new financial instrument may give companies another tool to burnish green credentials without changing the way they do business. The research published Monday by the United Nations Development Programme and the International Institute for Environment and Development, a UK-based think tank, comes as negotiators gather at the UN’s flagship biodiversity summit in Montreal with the hope of finalizing a global agreement to halt and reverse biodiversity loss by 2030.

Biodiversity — the breadth and variety of life and ecosystems on earth, from polar bears to plankton — is declining at an unprecedented rate, posing a threat to the planet and the financial system and accelerating the pace at which the planet is warming. The World Economic Forum estimates that roughly half of global gross domestic product, or  about $44 trillion of economic value , depends on the natural world in some way, meaning its destruction also carries an enormous financial toll.

More than 100 financial institutions representing some $17 trillion have called on world leaders to support effective measures to reverse nature loss by the end of this decade, a deal akin to the 2015 Paris Agreement that’s set a clear goal to limit global warming.Record attendance from corporates and finance executives is expected at this year’s summit, marking a step-change from the past where private sector attention was largely focused on the climate equivalent that took place in Egypt last month.

Still, the finance sector has struggled to find a clear entry point to plug the annual $700 billion financing gap for efforts to preserve and protect nature, a key sticking point for negotiators. That’s not for want of trying. The last couple of years have seen record biodiversity fund launches and a host of new financial instruments from human-wildlife conflict insurance to debt-nature swaps  and  rhino bonds .

So-called biocredits — measurable, traceable and tradeable units of biodiversity — may offer that entry point and help break the negotiating deadlock, the UN and IIED researchers said.

“Biocredits offer a tangible solution to the challenge of how to finance the conservation and restoration of nature,” Tom Mitchell, executive director of IIED, said in a statement. The instruments can also “meaningfully channel finance to local communities and indigenous people who are the most effective custodians of biodiversity,” he said.

The researchers analyzed three biocredit programs — one in Colombia, one in South Africa and one operating across a number of countries — each seeking to preserve biodiversity under threat, restore an ecosystem or landscape, or reward conservation efforts. Their enthusiasm has been met with caution among academics and nonprofits who draw the parallel to carbon markets. They’ve warned that biocredits could similarly be used by companies to meet environmental reporting targets or improve their image without having to take direct action to reduce their own harm to the environment. Carbon-credit markets have invited increasing criticism because they’re often linked to projects that fail to reduce planet-warming emissions in a meaningful way, yet allow buyers to offset the assumed gains against their own emissions — and even to make misleading net-zero claims.Studies on biodiversity offsetting schemes in Canada, Australia and at a global level have found very few achieve their targets and most are unsuccessful.“As with carbon offsets, biocredits risk aggravating the biodiversity crisis by enabling further destruction to take place as long as it’s allegedly compensated,” said Frédéric Hache, a former derivatives trader who’s now executive director of the Green Finance Observatory, a nonprofit. Hache recently coordinated an open letter to the UN Convention on Biodiversity, European Commission, World Economic Forum and World Wildlife Fund signed by more than 100 academics and nonprofits in which they call biodiversity credits a “false solution.”The UN study authors say those concerns can be addressed by drawing a “clear distinction” between biocredits and biodiversity offsets, with the former representing a positive investment in nature rather than a means to compensate for damage done elsewhere.

Biocredits “aren’t based on the principle of equivalency,” where harm in one location is comparable to reparations elsewhere, they say. Buyers must always prioritize impact mitigation and should be screened by a third party to ensure they aren’t using the credits to offset other environmental harm.“If biocredits and other mechanisms can be established correctly, then it could be a very good thing for marginalized communities, nature and investors,” said Peter Bachmann​, managing director of sustainable infrastructure at Gresham House, which is backing a scheme in the UK.

Carbon Pulse, a specialist carbon-markets news agency, launched Biodiversity Pulse Monday to track the emerging voluntary market for biodiversity credits. “Like the world's carbon markets, the biodiversity credit market will be complicated, fragmented, and in great need of specialized media coverage and expert scrutiny,” Carbon Pulse said in an email.

Market interest in biodiversity credits is “at a high level,” Credit Suisse wrote in a September report. Asset managers have also expressed interest.

Yet if they’re not used to compensate for harm, it’s not clear how much utility, or appeal, biocredits would have for companies or other investors. Carbon markets have grown because they help set a market cost on certain polluting activities and, for better or worse, give businesses some flexibility in managing their net emissions, at least for reporting purposes. Biocredits may be purchased by companies with an interest in investing to conserve the natural world on which their business or even the broader global economy relies, the researchers say.  The units also could be sold on a secondary market and used in investment portfolios like a commodity, said Paul Steele, chief economist at IIED and an author of the study.“The distinction is it's not net positive,” said Anna Ducros, nature economist at IIED and another study author. “It’s just positive.”