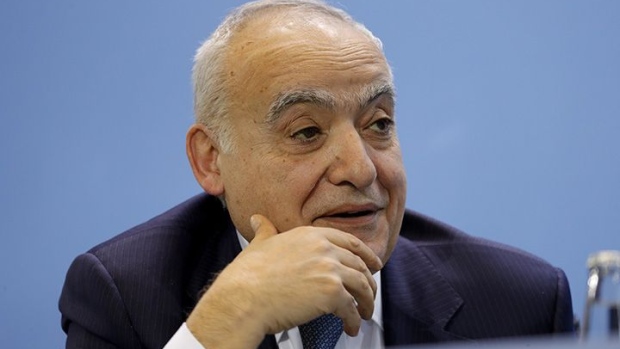 BERLIN, GERMANY - JANUARY 19: UN Special Envoy for Libya, Ghassan Salame attends a press conference on the International Libya Conference in Berlin, Germany, 19 January 2020. According to media reports the participants of the Berlin Libya summit have committed to a UN arms embargo and guaranteed an end of military support for the civil war parties. (Photo by Omar Messinger-Pool/Getty Images) , Getty Images

Libya’s warring rivals have shown a “genuine willingness” to transform the current truce into a more lasting one, a United Nations envoy said as a new round of talks got underway, in a distinct shift of tone from just five days ago.

“The two sides expressed their approval of the need to transform the truce into a permanent cease-fire agreement,” Ghassan Salame said at the start of UN-hosted negotiations in Geneva. The talks will focus how to go about this, he added.

Just last Thursday, Salame told the UN Security Council that an internationally brokered cease-fire was in “name only.”

The Geneva talks are the latest effort to end the fiercest bout of fighting in the North African OPEC member since longtime leader Moammar Al Qaddafi’s ouster in 2011. Five senior military officers are representing the internationally backed Tripoli government and another five have been dispatched by Khalifa Haftar, who touched off that fighting in April with an offensive on the capital.

Salameh said the sides were able to resolve some of the issues affecting oil production, particularly at the idled Sharara oil field that is Libya’s largest, but that efforts would take time.

The violence has left more than 2,000 dead and transformed the conflict into a proxy war between regional powers, with Haftar backed by Russian mercenaries, Egypt and the United Arab Emirates, and the Tripoli government headed by Prime Minister Fayez al-Sarraj supported militarily by Turkey. The country’s oil output has since plunged to its lowest levels since the NATO-backed uprising against Qaddafi.

An international meeting in Berlin last month involving the warring sides and their backers produced a tentative truce. Since then, however, both sides have accused the other of repeated violations.

To contact the reporter on this story: Tarek El-Tablawy in cairo at teltablawy@bloomberg.net

To contact the editors responsible for this story: Nayla Razzouk at nrazzouk2@bloomberg.net, Amy Teibel, Mark Williams