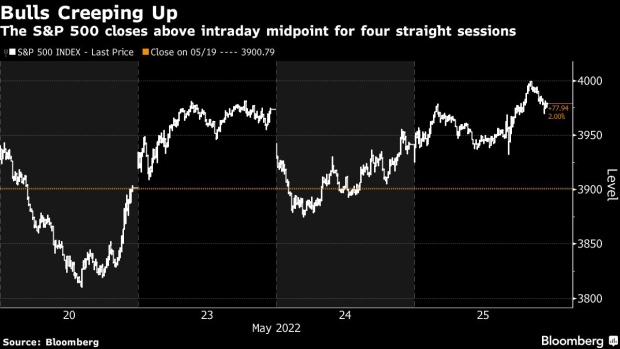 Their persistence can be seen in intraday price charts over the last four days, which show the benchmark closed above the midpoint of its range each time. That’s the longest streak in two months.

It’s a pattern that shows investors haven’t had the dip-buying impetus scotched after months of losses. To skeptics, the refusal to give in suggests that the last buyer has yet to capitulate and signal a bottom for stocks.

“It’s the old dead-cat bounce,” Rich Weiss, chief investment officer of multi-asset strategies at American Century Investments, said in an interview on Bloomberg Television. “There are people looking to bottom-fish here. We’re not and recommend against doing it.”

Stocks rallied Wednesday after minutes of the Federal Reserve’s May 3-4 meeting showed most officials agreed the central bank needed to tighten in half-point steps over the next couple of meetings, continuing an aggressive set of moves that would leave policy makers with flexibility to shift gears later if needed.

Concern that the Fed’s campaign to fight the fastest inflation in four decades would drag the economy into a recession has prompted investors to exit risk assets. Down about 17% since January, the S&P 500 is off to the worst start of a year since 1970.

“The recent string of favorable afternoon showings has happened under the radar, with so much pain still taking place under the surface,” said Frank Cappelleri, a trading-desk strategist at Instinet. “But should more afternoon strength materialize going forward, it eventually could give sellers a reason to pause.”