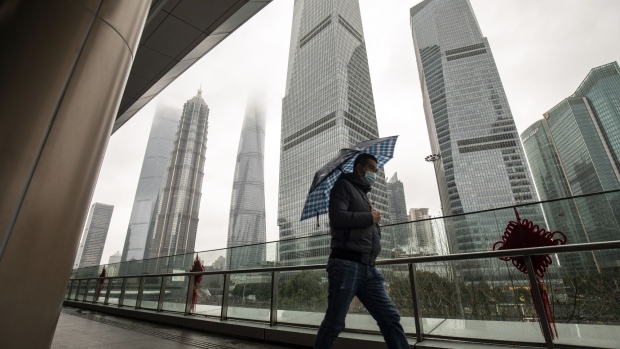 A pedestrian passes buildings in Pudong's Lujiazui Financial District in Shanghai, China, on Monday, Feb. 7, 2022. Asian stocks were mixed amid a rally in China on Monday as the nation’s markets reopened from a holiday, while the prospect of global monetary tightening continued to weigh on bonds. Photographer: Qilai Shen/Bloomberg , Bloomberg

(Bloomberg) -- Bribery. Kickbacks. Cover-ups. For one week in January, Chinese state television devoted its prime-time slot to a series that detailed high-profile financial crimes by some of country’s most senior bankers.

There was the former head of China’s largest policy bank, who accepted bribes to approve a $4.8 billion credit line to a conglomerate that failed shortly after. Another state-owned bank executive used carefully structured shadow firms to receive 10 million yuan in kickbacks for approving real-estate loans of more than 4 billion yuan to a single developer.

The multipart broadcast was framed as a celebration of Beijing’s long-running anti-corruption campaign, part of President Xi Jinping’s overall attempts to stabilize the economy ahead of a meeting that’s expected to award him a third term in office. But it also revealed how senior bankers have been allowed to operate with few checks and even less accountability, and connected their actions with massive credit defaults and other market instability.

The recent investigation into 25 entities marks the first systematic review of the financial sector since 2015, and last month, when it concluded, the nation’s top disciplinary watchdog sharply criticized financial institutions and regulators for prominent corruption and insufficient risk monitoring – problems it said were “common.”

More than 20 finance industry officials have been punished or probed since the investigation began; over the past few years, lax governance has contributed to estimated losses of hundreds of billions of yuan.

Without intervention, China’s financial sector could become “a runaway elephant in a china shop,” said Shen Meng, a director at Beijing-based boutique investment bank Chanson & Co. “Deep down, people still lack this awareness that essentially, corporate governance serves to cut the risk of decision making, by checking and balancing all parties.”

Listed firms are required to implement modern corporate governance structures, but China’s standards are often lower than those in developed markets. In the U.S., for example, independent directors make up about 80% of the board, on average. Most Chinese companies only meet the minimum requirement of one-third independent directors, a “lack of oversight that ultimately allows for poor operational and financial controls,” said Rob Du Boff, a Bloomberg Intelligence analyst specializes in ESG.

The collapse of China Huarong Asset Management Co. is one of the best-known cases where traditional governance mechanisms failed. Former chairman Lai Xiaomin was also the head of the internal party committee and the company’s legal representative. The company’s party discipline chief reported to him. “It was difficult for him to supervise me, to be honest,” Lai said in 2020.

Without any meaningful oversight, Lai drove Huarong to aggressive expansion. Eventually, the firm posted a record loss that led to a $6.6 billion state-orchestrated bailout, and Lai was executed for bribery and other crimes.

But there have also been smaller examples. Hu Huaibang, the former chairman of China Development Bank, took some 85.5 million yuan in bribes over a decade through 2019. In exchange, he facilitated loans that included $4.8 billion to the now failed conglomerate CEFC China Energy Co., even though China had called for the policy bank to cut its exposure to such commercial projects.

His motivation was basic: “As a senior executive in the finance sector, you get to make contact with people with relatively high classes and they own private jets and everything,” he said in the state-sponsored docuseries. “That’s when I felt the unfairness and became weak-minded and slipped into the abyss.”

Senior leaders at Chinese financial institutions, especially state-owned ones, hold official government titles and earn government-limited salaries. The chairmen of China’s largest state-owned banks each earn about $120,000 a year – less than 1% of what their U.S. counterparts made in 2020.

The former governor of China Citic Bank Corp., Sun Deshun, often neglected the bank’s internal credit approval board and intervened directly to facilitate loans for developers in exchange for bribes. Investigators found he used more than a dozen shadow firms, managed by his two surrogates, for bribes disguised as financial products and equity investments.

In early 2020, the banking regulator levied a 22 million yuan fine on Citic Bank for 19 violations, of which 13 were linked to the property sector. Later that year, Sun was expelled from the Communist Party, arrested for alleged bribery among other violations, and prosecuted.

But regulators were also susceptible. A former deputy chairman of China’s banking regulator, Cai Esheng, used his personal influence to facilitate loans and projects in exchange for cash, banquets, travel and other gifts.

In the case of Baoshang Bank Co., at least five officials including the former head of the Inner Mongolian banking watchdog took hundreds of millions of yuan in bribes to make way for its “wild expansion and illegal operations” that eventually led to its collapse and China’s first bank seizure in more than 20 years.

These kinds of investigations are common across sectors in China, where the government intends them to both deter bad behavior and reassure investors, said Oliver Rui, a professor of finance at China Europe International Business School in Shanghai.

“It takes some time to fully develop governance mechanisms,” he said. “The current systems in the U.S. were also built gradually. I like to say -- in Chinese terms -- let the bullet fly for a while.”

Meanwhile, officials have introduced measures designed to prevent future corruption. Last year, authorities issued guidelines targeting bribers and have pledged to step up internal controls to keep regulators in line. The government has also strengthened Communist Party control over management decisions at state-owned banks. The central bank and the banking and securities regulators have vowed to correct their wrongdoings and to enhance financial regulation.