Retail positioning is too crowded on the long side, sell on rallies: Martin Roberge

Under Armour Inc. Chief Executive Officer Patrik Frisk is stepping down from the struggling athletic-wear brand after disappointing quarterly results hammered the stock this month.

Chief Operating Officer Colin Browne, who has been at Under Armour since 2016, will become interim CEO on June 1 as the board begins its search for a permanent replacement, the company said on Wednesday. Frisk, who the company declined to make available, will stay on as an adviser through August.

Executive Chairman Kevin Plank said in an interview that the board decided it was time to shift from a restructuring posture, which Frisk oversaw since joining the company in 2017, to one focused on growth.

“It’s the right time for the business to really pivot,” said Plank, who founded the company in 1996. The move wasn’t made because of one bad quarter, he said. “We’re ready for the next chapter to begin.” 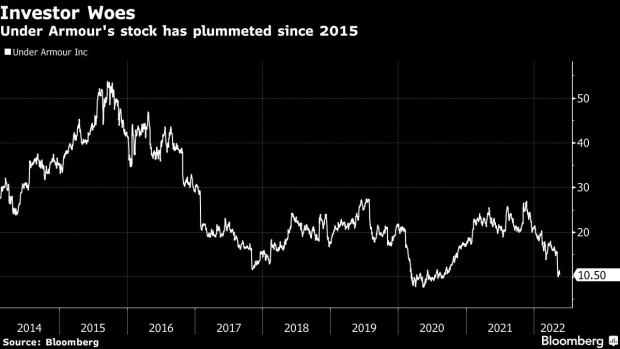 Frisk, who was 59 at the end of last year, will receive US$7.1 million in severance, according to a company filing.

With Under Armour struggling in 2017 after its meteoric rise, Plank, then the CEO, hired Frisk from shoemaker Aldo Group as president to oversee daily operations and execute a restructuring of the company’s finances. In early 2020, Frisk replaced Plank just as Covid-19 took hold.

The pandemic initially hit Under Armour hard, like a lot of other apparel brands, but sales bounced back last year. Then supply-chain issues weighed on results, and that’s crushed the stock, knocking it down by 52 per cent this year, including a small drop in Wednesday’s after-hours trading.

Those declines continued a painful stretch for Under Armour’s investors. In the middle of last decade, the company looked headed toward becoming a global brand that would truly challenge industry leader Nike. Its market value topped US$22 billion. (Now it’s worth less than a quarter of that.)

Plank’s ambition appeared to have no bounds. The brand pushed into basketball sneakers and debuted a men’s fashion line. It paid hefty sums to get top US colleges to outfit their teams in Under Armour gear.

But the business quickly turned as competition heated up and a major retail partner, Sports Authority, went bankrupt and liquidated. The company started losing money.

Frisk, who had worked on brands like North Face and Timberland, came in and cut costs and revamped operations. The restructuring concluded in March, having totaled US$571 million in charges.

Earlier this month, Under Armour said it was expecting revenue to rise five per cent to seven per cent in the current fiscal year, including a 3 percentage point hit from order cancellations, shipping delays and the Covid outbreak in China. Its earnings per share forecast of 63 cents to 68 cents for the year fell short of analyst estimates.

“The past five years have been about putting in place a platform, building out the model and building the foundation,” said Browne, who was 57 at the end of 2021. “We’re at that next iteration.”