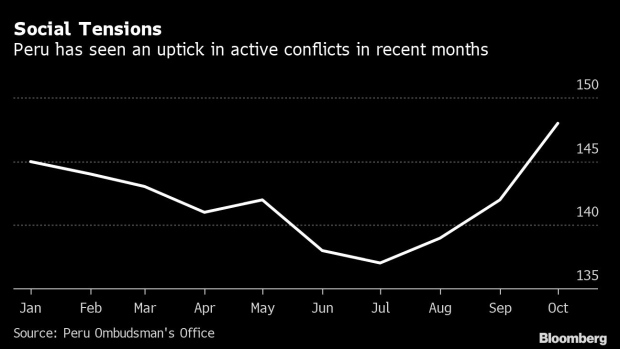 (Bloomberg) -- In the endless jousting between global mining conglomerates and many Peruvians, Julio Guillermo had long been considered pretty marginal -- an anti-government rabble rouser fighting not for a bigger share of the spoils but to shut mines down in his south-central highlands.

Like his fellow local activists, Guillermo, 49, bases his demands on pollution of waterways, which miners dismiss, and on an argument that’s harder to counter: his land in Ayacucho is sacred, no place to be gouging for silver and gold. “It’s like undoing your temple, your beliefs,” he says in an interview.

His approach never found much favor in Lima -- until now. With the inauguration in July of President Pedro Castillo, a rural activist from a Marxist party, Guillermo has a powerful ally, and last month the government unexpectedly announced that the licenses of four precious-metal mines in Ayacucho wouldn’t be renewed. Share prices in Hochschild Mining Plc plunged.

And then the government -- under pressure from the mining industry and conservative parties -- appeared to shift back, saying it could allow extensions for those mines. As protests mount elsewhere in a country that is among the top suppliers of copper, zinc and silver, miners say their future in Peru, an emerging market favorite, looks cloudy.

“Companies are starting to wonder if staying in Peru is worth it,” said Raul Jacob, head of Peru’s mining society and chief financial officer of Southern Copper Corp. He said that even as one conflict gets resolved, “it’s just a matter of time until another one explodes. There’s no solution to the root problem.”

The battle over mining in Ayacucho is a flashpoint for the new government as well as for global metal markets that rely on Peru’s rich deposits to help meet rising demand in the transition away from fossil fuels.

Castillo has already dodged one impeachment attempt by opposition members of congress. His need to appease the more moderate factions of Peruvian politics has seen him soften his tone on resource nationalism.

But it’s a delicate dance. He needs the support of his party’s more hardline factions as well as the rural voters who put him in power. The Ayacucho community groups have already threatened to resume protests.

Under Castillo, social conflicts are on the rise nationally. The mining industry puts some of the blame on his administration’s prioritizing the right to protest over other concerns such as free transit. It may also be due to the pandemic and heightened expectations from the new government.

The mining industry says the problem begins with inefficient spending of the tax dollars it generates. In isolated areas with poor services and infrastructure, mines can become de facto local governments and therefore an easy target for grievances.

While Glencore Plc and Hudbay Minerals Inc. recently brokered deals to resolve community conflicts at Peruvian mines, MMG Ltd. is halting operations because of roadblocks by people living 200 km (125 miles) away who want greater benefit. In October, there were 148 active conflicts in Peru, including a mine set on fire.

Further deterioration in community relations could be far reaching. Mining directly employs about 240,000 people in Peru, and last year accounted for 62% of exports and 8.8% of gross domestic product.

Government data show a mining project pipeline of more than $50 billion as companies look to tap deposits that are higher quality and lower cost on average than those across the southern border in Chile. For copper, those investments are crucial to help meet projected demand growth in the transition to clean energy and transport.

Convincing people that mining is a boon rather than a threat may determine the industry’s future.

Activists in Ayacucho will take a lot of convincing.

Guillermo sees the environmental damage as intertwined with cultural erosion. Before his father and uncles sold land that’s now a silver-gold pit run by South America Mining Investments SAC, it formed part of the Incan trading routes. Now the old bartering practices and archaeological remains have gone and the area’s spiritual significance is in peril, he said.

“The water springs and the hill are like a deity -- that’s why we give the hill its offering,” Guillermo said. “The hill disappeared with the mining company.”

Locals say they constantly find dead fish and cows and that some villages can no longer drink from their streams.

The main mine operators in Ayacucho say they’re acting responsibly and complying with regulations. Hochschild, whose shares lost 28% on the trading day after authorities agreed to relinquish permits, has vowed to defend its rights. Cia. Minera Apumayo said it has good relations with local communities, while condemning acts of violence by other politically motivated groups and urging authorities to investigate contamination allegations, adding that rivers naturally contain minerals.

That doesn’t fly with Medita Huayhua, who’s leading the battle against mining in Chavina, about three hours drive from Guillermo’s town of Breapampa. She blames the Apumayo mine, located upstream, of contaminating her town’s water sources as heavy rains wash down waste, leading to high rates of anemia and cancer among residents. People in the nearby town of Sancos voice similar concerns.

“The president said the mining companies that are at the head of the basin are going to withdraw,” said Huayhua, who has had breast cancer surgery. “We would like him to keep his word.”