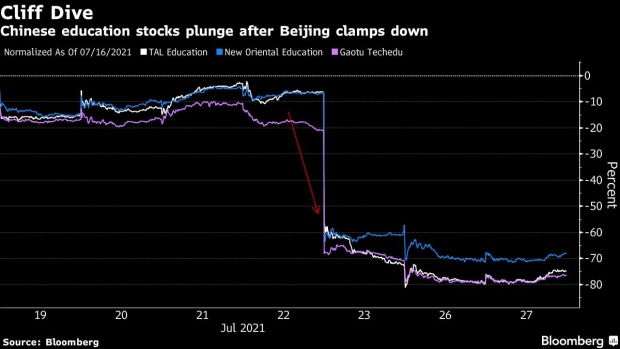 (Bloomberg) -- China’s largest private education firms are moving swiftly to overhaul their businesses to adjust to a harsh new reality after Beijing launched a sweeping crackdown on the $100 billion sector.

Two of the sector’s biggest names have in past days reached out to reassure investors and managers their businesses remain viable and won’t abruptly collapse, according to people familiar with the matter. Yuanfudao, the $15.5 billion startup backed by Tencent Holdings Ltd. and DST Global, plans to yank all advertising after already curtailing part of its marketing earlier this year, one of its largest expenses, the people said, asking not to be identified talking about a sensitive matter. But the startup also said it has ample cash on hand to sustain its business, one of the people said.

TAL Education Group President Bai Yunfeng told his lieutenants during an internal meeting it’s in no danger of failing but will have to adjust course. It’s considering providing certain after-class courses for free while creating more self-study online resources, a person familiar with the proceedings said. Fresh layoffs are possible, the person added. And Rise Education Cayman Ltd., controlled by Bain Capital, is expanding its non-academic curriculum -- such as science or drama courses -- to offset declines in its specialty of English-language teaching, a person with knowledge said.

Those represent just the opening moves in an industry-wide restructuring as its biggest players from leader TAL to New Oriental Education & Technology Group Inc. and Gaotu Techedu Inc. come to grips with new regulations that threaten to annihilate much of the private tutoring arena. A Yuanfudao representative declined to comment. Representatives for TAL and Rise didn’t respond to calls and messages seeking comment.

The regulations unveiled last week target after-school tutoring for kindergarten through ninth grade and marked the culmination of a months-long campaign to rein in the ad spending wars and cut-throat competition that’s come to define a sector critical to China’s future workforce. But the growing cost of tuition, along with a relentless stream of ads that play on parents’ paranoia, has triggered widespread outrage over how the industry is enriching entrepreneurs and their financiers while fomenting social inequality.

“While I don’t think the companies would necessarily need to delist like some have suggested, it’s up to each and every firm’s business decision whether they need to spin off their K-9 business,” said Vivien Chan, an analyst with Zhongtai International in Hong Kong. “Big players with a healthy cash flow may choose a long-winding restructuring path, while smaller ones might just be forced out of the market.”

The assault on private tutoring dovetails with Beijing’s campaign to curb the growing power of internet companies from Didi Global Inc. to Alibaba Group Holding Ltd. and Meituan, who over the years have amassed a hoard of online data that the government now wants to control. The clampdown on the education industry however underscores how far Xi Jinping’s Communist Party is willing to go to contain the country’s giant private sector. In one unusual development, education authorities in the eastern city of Huangshan raided a high-end villa where a public schoolteacher allegedly offered tutoring to middle-schoolers, local press reported.

The three biggest listed firms -- TAL, Gaotu and New Oriental -- have shed at least 60% of their market value since Friday.

China’s online education sector had been expected to generate 491 billion yuan ($76 billion) in revenue by 2024 -- a sizzling pace of growth that briefly made stock market darlings of TAL and Gaotu and groomed giant startups like Yuanfudao and SoftBank Group Corp.-backed Zuoyebang.

It’s also fueled an ad boom that’s buoyed the likes of Tencent, ByteDance Ltd., Kuaishou Technology and Bilibili Inc., who command prime audiences of hundreds of millions, including anxious parents. Edtech ads have in recent years sprung up everywhere from subway stations to elevators and online, ranging from benign promos to aggressive ads that suggest their children would be stuck in blue-collar jobs if they don’t act now.

In 2021’s first half, education and tutoring ads accounted for about 9% of the total number of ads displayed on Tencent’s and Baidu Inc.’s online platforms, according to data tracked by Guangzhou-based researcher App Growing. Zhongtai’s Chan estimates the K-9 business accounts for up to 80% of New Oriental’s revenue and 90% of TAL’s sales.

“It’s unclear what level of restructurings the companies should undergo with a new regime (well, we’re not even sure if they can stay listed),” JPMorgan analysts wrote this week. “This makes these stocks virtually un-investable.”

The industry now awaits clarity from the education ministry and local authorities on the high-level edicts issued by the State Council over the weekend, the people familiar with the matter said. Compounding the problem is the fact that most customers have paid in advance for courses over the summer -- the height of the tuition season -- and would demand classes continue, they said.

Not all the industry’s players are bracing for the worst. China Online Education Group, whose 51Talk platform connects Chinese schoolkids with teachers abroad, believes it’s not in violation of a moratorium on hiring foreign teachers outside the country because they serve as a matchmaker but don’t hire foreigners as formal staff, one of the people said. In a statement Monday though, the company warned the new regulatory regime will “have a material adverse impact on results of operations and prospects,” adding it’s working with the government to ensure compliance.

China’s harsher-than-expected new rules for listed tutoring firms could lead TAL as well as New Oriental and its online subsidiary, Koolearn, to consider delisting their shares in the U.S. and Hong Kong. The regulations include barring them from raising capital to invest in other firms that teach the school curriculum. The new regime also turns the sector into a non-profit industry and ban lessons related to the syllabus during weekends and holidays. We expect the crackdown to decimate revenue and widen operating losses for New Oriental and TAL through 2024.

It’s ultimately unclear how the government clampdown will turn out -- many believe Beijing won’t seek to obliterate an industry that still plays an essential role. In statements over the weekend, all the major education companies said they would comply with the new rules and support the decisions of the Party.

Apps operated by companies including Yuanfudao, Alibaba-backed Zuoyebang, Tencent-backed VIPKid and TAL appear to be operating normally for now. On Wednesday, Yuanfudao officially rolled out a STEAM teaching app (called Pumpkin Science), marking its “transition into quality education”, the company said in a press release.

Zuoyebang is still touting a 3-yuan video package for new six graders on its home page. Some livestreaming courses offered by Yuanfudao for the remainder of the summer break were booked solid. Teaching assistants on those tutoring apps reassured parents the classes they’ve signed up for won’t be shut down. Even apps that let kids take pictures of their homework and search for answers online -- a category specifically called out and banned in the State Council’s document -- worked fine as of Wednesday.

For now, many investors may choose to err on the side of caution.

“There will probably be a grace period when institutions will be allowed to continue with their summer holiday classes but restricted from taking in new students or opening new venues,” Zhongtai’s Chan said. “We still need to see how local governments implement the rules.”