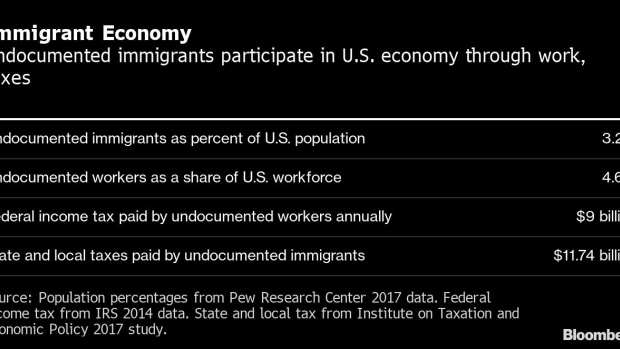 NEW YORK, NEW YORK - JULY 22: Food is distributed at the Ebenezer Seventh-day Adventist church on July 22, 2020 in the Brooklyn borough of New York City. The church distributes hundreds of packages of food every Wednesday. While many New York neighborhoods have long depended on charities, food banks and nonprofits to meet their nutritional needs, the Covid-19 pandemic has only multiplied the number of residents experiencing food insecurity. Across the city groups that serve those in need are seeing a huge increase in clients. According to the mayor’s office, an estimated 2 million people are currently food insecure in New York City, which is up from 1 million people before the pandemic. (Photo by Spencer Platt/Getty Images) , Photographer: Spencer Platt/Getty Images North America

Undocumented workers in the U.S. are running out of options to help them survive the coronavirus pandemic.

Largely left out of federal relief programs, undocumented families have relied on money from philanthropic organizations and local governments to help buy food and to pay their bills. But now some of those funds are drying up, exacerbating the public health crisis and further threatening an economic recovery that’s become shakier with the recent surge in virus infections and a renewed wave of layoffs.

Programs backed by municipalities with support from community-based organizations in Minneapolis; Austin, Texas; Chicago; and Montgomery County, Maryland, are being halted or almost out of money. The programs, which have provided funds to help immigrants pay rent and other expenses, have not been able to keep up with such high demand.

In California, a statewide effort to give $1,000 per family stopped taking applications in June. Nonprofits face funding challenges themselves, with some donors potentially becoming more tightfisted as the pandemic lasts longer than many expected.

Undocumented immigrants in the U.S. often pay taxes but don’t have access to unemployment insurance or benefits like the stimulus checks the government has provided to many Americans. The $2 trillion stimulus that Congress passed earlier this year denied aid to 15.4 million people in mixed-status families, including 9.9 million unauthorized immigrants, 3.7 million children and 1.7 million spouses who are U.S. citizens or green card holders, according to the Migration Policy Institute.

As Congress debates another round of financial support for Americans, House Democrats have proposed legislation that would give immigrants stimulus checks, but Senate Republicans -- who have offered a $1 trillion virus relief package -- oppose such aid.

Margarita, an immigrant from Mexico and single mother of three, was laid off in March from her job working at a warehouse in New Jersey that ships Italian products. She said she struggled to pay rent and feed her children, ages 20, 15 and 4. She returned to her job in June but has continued to work with advocacy groups calling on lawmakers to extend relief to undocumented immigrants. She declined to provide her full name due to her citizenship status.

“I’ve been out to marches and rallies, and banged pots and pans when we couldn’t go outside,” said Margarita, 39, who is a member of Make the Road New Jersey, a community group for immigrants. “No one should be left behind.”

The mounting financial pressure on this group can impede efforts to contain the virus because they feel compelled to go to work when they are sick, according to Jill Campbell, director of the immigration and citizenship program at BakerRipley, a community development organization in Houston.

“We have clients that call us and say, ‘I am terrified, terrified to go into work because I know that my coworkers have Covid right now but I have no other options,’” said Campbell, adding that because many immigrants live in multigenerational households they have a higher risk of spreading the virus to elderly family members.

“They’re really choosing between their own health and their family’s health -- and being able to pay the rent,” she said.

Aiding immigrants throughout the pandemic is critical for the U.S. economic recovery because it means more people are working and spending money, said Cris Ramón, senior policy analyst at the Bipartisan Policy Center in Washington. About 4.6% of U.S. workers are undocumented immigrants, according to Pew Research Center.

Running out of funds

Austin’s program to help these immigrants has run out of funding and no longer accepting applications after previously providing $1.4 million in financial assistance. St. Paul, Minnesota, and Chicago have also stopped taking applications to their programs.

Houston’s $15 million rental assistance program ran out of money within two hours of starting to take applications in early May. Harris County, which includes the city, passed additional funding for its program this week as demand for relief persists.

Some organizations, including one in South Dakota and another in New Jersey, are still taking applications and raising money to support undocumented workers. But for those immigrants who do receive funds, it’s likely a one-time payment that doesn’t compare to unemployment benefits most Americans receive, said Muzaffar Chishti, senior fellow at the Migration Policy Institute.

Putting food on the table has been especially difficult during the pandemic, even for undocumented immigrants who are employed. Demand has increased 40% since March at Manna Food Center, a food bank in Montgomery County that serves immigrants, according to Chief Executive Officer Jackie DeCarlo. The area’s emergency assistance program, which provided one-time payments of up to $1,450 to residents ineligible for federal aid, exhausted its funds in June.

Rocio, an immigrant from Jalisco, Mexico, was laid off from her job at a Sacramento, California, buffet restaurant in March. She and her husband support three children, as well as her 80-year-old father in Mexico. Rocio has turned to a community center for help with food and has delayed paying rent. She also declined to provide her full name because she fears legal repercussions.

“In three months our life changed,” said Rocio, 50. “Covid has brought an end to many years and many dreams.”