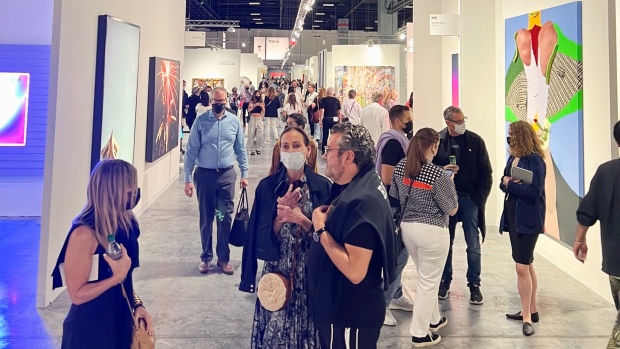 (Bloomberg) -- News headlines have been beating a continuous, ominous drumbeat about the Covid-19 omicron variant, but wealthy collectors continued to line up on Tuesday morning for the VIP opening day of Art Basel Miami Beach.

The art fair, which runs through Saturday (VIP days are on Tuesday and Wednesday, after which the public can pay $65 for a one-day pass) is the latest test of rich peoples’ appetites for large gatherings.

Based on the first day, art collectors’ tolerance for risk remains strikingly robust.

“Everyone’s here this year,” says Kibum Kim, a partner at the Los Angeles Gallery Commonwealth and Council, whose booth included a series of steel works by the artist Beatriz Cortez.

“Even people who said they weren’t coming decided to come,” he says.

Over the course of the fair’s first two hours, not a single dealer, when asked, could name a collector who’d changed plans because of the latest Covid variant.

Local collectors, she adds, are similarly unfazed. “Nobody in Florida is nervous—it’s just us neurotic New Yorkers,” she says. “Even my former liberal friends who live here are like, ‘What’s Covid?”

Sales on the first day were accordingly solid.

Boesky sold multiple pieces in her booth, including a resin-on-wood piece by Donald Moffett for $160,000 and a new work by Jammie Holmes for about $85,000. “We’ve had a really good response so far,” she says.

As sales reports trickled in over the course of the day, other galleries told similar stories.

Mega-gallery Hauser and Wirth sent out a release saying it had sold 18 artworks in the first few hours of the fair, ranging from a $250,000 painting by Henry Taylor to a solid, cast-glass sculpture by Roni Horn that went in the range of $1.2 million.

Rival Pace sent out a release saying it had sold “over 30” works. New York’s Gladstone Gallery announced the sale of more than 20 works, including a Richard Prince photograph for $100,000 and a painting by Keith Haring for $1.75 million.

If art wasn’t exactly flying out of many booths, it could, dealers speculated, be a product of the art fair’s Covid-related timed-entry system, which limited entry to various time slots.

Without the crowds, some dealers say, there isn’t pressure to buy.

“It sounds cheap, but it’s like the auction house’s function,” says dealer Daniel Buchholz, whose gallery has locations in Cologne, Berlin, and New York. “If there are two people who want the same thing, it always goes better. It’s a matter of psychology.”

Buchholz relates a story that Ernst Beyeler, the late dealer who co-founded the original Swiss iteration of Art Basel, told him.

“He said he had a very old dog, and he gave him the best food,” Buchholz says. “And the dog wouldn’t touch it. Then his cat came and started to eat the food, and then the dog wanted it, too. And that’s how the art market functions.”

Even so, within the first 30 minutes of the fair, Buchholz sold a sculpture by the artist Iza Genzken for $250,000.

At this point, Art Basel Miami Beach is only one small component of Miami’s “art week,” a loose combination of art fairs, art parties, sponsored dinners, and many, many product launches couched in such terms as “brand activation.”

That’s been the case for years. What’s new for 2021 is the preponderance of these events dedicated to crypto and NFT ventures—reflecting, perhaps, the deluge of recent investment.

There is a “crypto cocktail” event on a 279-foot-long yacht cohosted by a group that includes Coinbase and the yacht brokerage Kitson Yachts; the SLS South Beach has offered NFTs for sale in of every one of its hotel rooms; and CC, “the first-ever Metaverse digital pop star,” will debut in a “3D hologram live show.”

Listing all of the crypto/NFT-related conferences, panel discussions, house parties, “immersive” exhibitions, platform launches, and celebrity tie-ins (participants range from Pierce Brosnan to Pitbull) during Miami’s art week would be excessive. Suffice it to say that Miami Beach, if only for a few days, appears to be crypto obsessed.

That is, everywhere but in the fair itself, where the main action was focused resolutely on a slightly older technology.

Trying to discern trends in a fair with booths from 253 galleries is always a losing battle.

Still, multiple attendees remarked on the fact that paintings were still definitely in vogue, but this season they seemed to be, well, bigger.

“There are a lot of people who’ve just bought their fourth home, and they need a large painting,” deadpans Boesky. “Or for their condo in Miami. This is our crowd.”