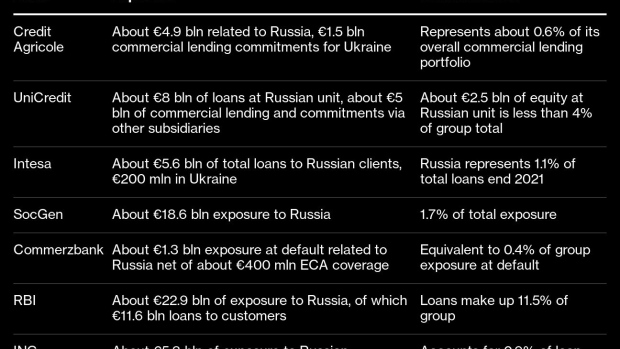 (Bloomberg) -- UniCredit SpA signaled a hit of about 200 basis points to its capital buffers in an “extreme scenario” in which its Russian banking assets are wiped out, joining European lenders detailing the potential fallout from the financial turmoil after the Ukraine invasion.

The Milan-based bank doesn’t consider an extreme scenario -- where the entirety of its exposure to the country is no longer recoverable -- as its base case and confirmed that it will pay its planned dividend on 2021 earnings. The bank said it’s closely monitoring developments within the country, while stopping short of Italian rival Intesa Sanpaolo SpA and insurer Assicurazioni Generali SpA in reviewing or exiting its business in the country.

UniCredit is among European banks with the biggest exposures to Russia, along with Austria’s Raiffeisen Bank International AG and France’s Societe Generale SA. It offers banking services to corporate and individual clients in the country through 4,000 employees and 70 branches. Loans to customers of UniCredit’s Russian unit amounted at 7.8 billion euros at end December, while cross border exposure to Russian customers is about 4.5 billion euros.

UniCredit’s comments echo those of Societe Generale, which last week warned of a potential hit of 50 basis points to its capital buffers in an extreme scenario in which it was stripped of property rights to its banking assets in Russia. Both banks said said their dividend would remain unaffected in a worst-case scenario and that they have more than enough buffer to absorb the hit. By contrast, Raiffeisen Bank International halted its 2021 dividend payment.

European banks are seeking to reassure investors of the muted impact of even an outright nationalization of their assets in Russia after their stocks bore the brunt of the sell off in European equity markets. Many European lenders such as Deutsche Bank AG have been winding down their dealings in Russia over recent years.

Last week, rival Intesa Sanpaolo SpA said its operations in Russia are “under strategic review,” as banks in the region struggle with the impact of financial sanctions. Generali SpA, Italy’s largest insurer, said last week that it‘s winding down its Europ Assistance operations in Russia, quitting the board of Ingosstrakh Insurance Co. and closing its Moscow representative office.

At the December unveiling of UniCredit CEO Andrea Orcel’s new strategy for the bank, the lender forecast that Eastern Europe including Russia would have the highest profitability of any of its regions. UniCredit some 12 billion euros in assets in Russia, and did due diligence on taking over local lender Otkritie Bank FC -- but the Ukraine situation made it untenable.

Italian and Austrian banks have increased their exposure to Russia since early 2015 while European peers pulled back, according to data from the Bank for International Settlements compiled by Bloomberg Intelligence. Other major foreign banks in Russia include lenders from France, Germany, the Netherlands and the U.K., the data show.

The European Central Bank has intensified monitoring of the risks that lenders face to their liquidity, loan books, trading and currency positions, Bloomberg has reported.

Russia’s economy is being roiled by sanctions, with its foreign reserves frozen after it invaded Ukraine, while Moscow’s capital controls and a ban on foreigners selling securities locally have shut the exit for international investors. Fitch Ratings and Moody’s Investors Service have cut the country’s credit ratings to junk and MSCI Inc. is eliminating Russian equities from its emerging-markets index. Several of the country’s largest banks have been blocked from parts of the global financial system.