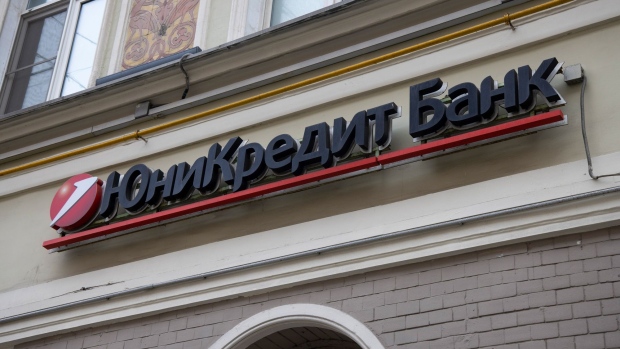 A sign above the entrance to a branch of Unicredit Bank AO in Moscow, Russia, on Wednesday, Feb. 23, 2022. U.S. President Joe Biden's debut set of sanctions on Russia for its actions over disputed Ukrainian territory hit markets with a whimper and were quickly criticized as limited in scope. , Bloomberg

(Bloomberg) -- UniCredit SpA is considering selling its Russian unit through a structure that would allow the bank to repurchase the subsidiary if the geopolitical situation stabilizes, according to people familiar with the matter.

Italy’s second-largest lender is looking at several possible deal arrangements, including one that would give it the option of buying back the unit depending on market and political conditions, said the people, who asked not be named because the matter isn’t public.

UniCredit already took 1.85 billion euros ($1.9 billion) of charges on its Russia unit and Chief Executive Officer Andrea Orcel is seeking a deal that would limit any further pain whatever the outcome of the war in Ukraine. Orcel’s slower approach contrasts with peer Societe Generale SA, which took a roughly 3-billion-euro hit when agreeing to sell its business in Russia earlier this year.

UniCredit’s Russia operation, which serves some 1,500 corporate clients via 4,000 employees, has attracted interest from non-sanctioned Russian financial institutions and firms interested in obtaining a bank license in the country, the people said.

Potential suitors from countries including China, Turkey and India, seeking to replace Western firms’ activities in Russia have also expressed interest, the people said. Early stage talks with potential buyers are ongoing, Bloomberg reported in May.

UniCredit, Austria’s Raiffeisen Bank International AG and Societe Generale were the top Western European lenders in Russia on the eve of the invasion of Ukraine. SocGen agreed to sell Rosbank PJSC unit to the investment firm of Russia’s richest man, Vladimir Potanin. Raiffeisen has said it’s considering a sale, as well as alternatives that could see it retain ownership.

Since Russian President Vladimir Putin ordered the invasion of Ukraine in February, Western businesses operating in Russia have been faced with a complex sanctions situation and the reputational risk from continuing to do business while human rights violations are carried out by the state. Former UBS Group AG chairman Axel Weber said earlier this year he sees no future for international banks in Russia, even if there’s a ceasefire, as Putin had made the nation an international pariah.

Orcel is signaling more optimism that Russia will ultimately re-enter the global market. Also feeding into the calculation is the fact that the subsidiary is performing well, gaining transfers and business flows as other major lenders including Sberbank, VTB Bank and Alfa Bank face international sanctions, some of the people said.

“Writing it off and gifting it is not consistent with sanctions and is, in our opinion, not morally correct,” Orcel said last month.