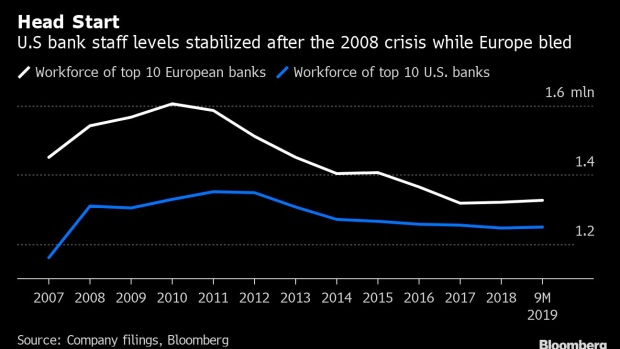 (Bloomberg) -- UniCredit SpA’s plan to eliminate 8,000 jobs is pushing cuts announced by banks this year past 73,000, almost all of them in Europe, where negative interest rates and a slowing economy force lenders to slash costs.

Chief Executive Officer Jean Pierre Mustier on Tuesday announced the measures as part of the next, four-year chapter in his overhaul of Italy’s largest bank. They bring the total job cuts disclosed by banks around the world to 73,400, with 86% of that in Europe.

The figures underscore the weakness of European banks as the region’s export-oriented economy is rocked by international trade disputes while negative interest rates eat further into lending revenue. Unlike in the U.S., where government programs and rising rates helped lenders rebound quickly after the financial crisis, banks in Europe are still struggling to regain their footing. Many are firing staff and selling businesses to shore up profitability. UniCredit says its next round of job cuts will help eliminate 1 billion euros ($1.11 billion) of gross expenses.

Banks from Germany, the most-fragmented major banking market in Europe, top the list of job cuts. Deutsche Bank AG is planning to get rid of 18,000 employees through 2022 as it retreats from a big part of its investment banking business. UniCredit’s announcement adds to the thousands of positions that will go at banks from other European countries as they seek to shore up profitability.

It isn’t all gloom, though, as firms seek to add jobs to update their technology and improve compliance. UniCredit says it will spend 9.4 billion euros on its information technology over the coming four years, including on human resources.

To contact the reporter on this story: Nicholas Comfort in Frankfurt at ncomfort1@bloomberg.net

To contact the editors responsible for this story: Dale Crofts at dcrofts@bloomberg.net, Christian Baumgaertel