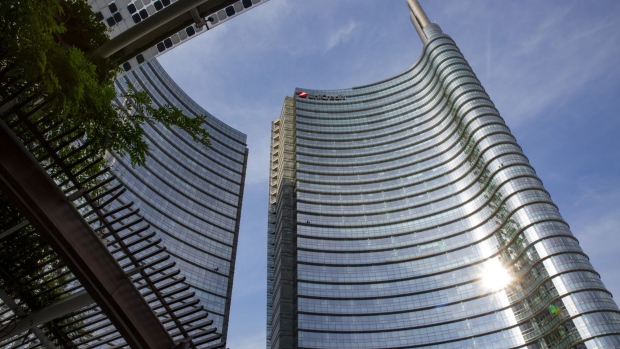 The Unicredit bank building stands in Milan, Italy, on Monday, May 18, 2020. Italy's shoppers may be digging out their wallets as retail businesses reopen on Monday, but many of the country's 2.7 million merchants say theres little to celebrate. Photographer: Francesca Volpi/Bloomberg , Bloomberg

UniCredit SpA is planning to move most of its London-based trading staff to Milan as Chief Executive Officer Andrea Orcel looks to accelerate plans by the bank to shift more people to the continent after Brexit.

About 50 staff working in its trading operations in London have been asked to relocate and to decide whether they’ll move by the end of the year, people with knowledge of the matter said. The bank is also considering moving some of its Munich-based traders to its Italian headquarters, the people said.

Orcel, who took over in April, has been working to slim down the lender and speed up decision-making, reducing the ranks of top management and reorganizing businesses in regions where it operates. The executive is set to outline his broad strategy for the bank by the end of the year.

The rearrangement of trading operations has sped up in tandem with the gradual return to the office since September that is leading to the reorganization of spaces and desks. The bank is working on a plan that will offer administrative and headquarters staff the option to work from home approximately two days a week on voluntary basis.

While a decision on Germany-based traders hasn’t been defined yet, the whole reorganization may affect a number of roles in the department, with some cut, the people said. The bank is also intending to boost its investment banking presence with 50 hires to capture more business from medium-sized corporate clients in continental Europe, Bloomberg reported this week.

Since the U.K. voted to leave the European Union, the bloc has been pushing lenders to move more front-office staff from London. Governments from Paris to Rome have also offered tax breaks to bankers returning to the continent, with Italy offering a 70% rebate on income tax for the first five years plus the possibility to extend if for another five years.

Brexit has cut some ties between London and financial centers inside the European Union, leading to a chunk of equity trading and other business shifting from London to the bloc, and even to New York. Hundreds of jobs and billions of euros of assets have shifted to the continent so far, although the departures have been lower than feared.