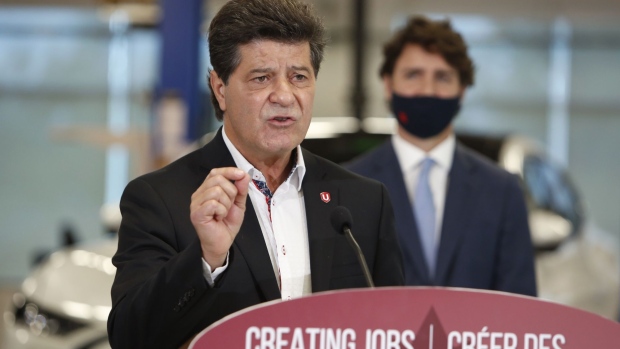 Jerry Dias, president of the Unifor union, speaks during a news conference at the Ford Connectivity and Innovation Centre in Ottawa, Ontario, Canada, on Thursday, Oct. 8, 2020. , Bloomberg

A day after Unifor president Jerry Dias announced his sudden retirement, the union revealed it has been investigating the now former president since late January.

Canada's largest private sector union said in a statement Monday that secretary-treasurer Lana Payne was sent a complaint about Dias on Jan. 26 that alleged he engaged in a breach of the union's constitution.

The union representing 315,000 workers has not shared details of the complaint, but said Dias was notified of an independent investigation, which is ongoing, on Jan. 29 and took a medical leave on Feb. 6.

He was slated to retire in August, but later notified Unifor's executive board that he would retire immediately and cited health issues on March 11.

“After eight and a half years I can proudly say we have built an incredible organization and made Unifor the influential and successful union it is today," Dias said in the news release announcing his departure.

The union refused to comment until it receives the investigative report, which it said is expected in the near future. Unifor's board plans to discuss the matter on March 21.

Unifor Local 444 president Dave Cassidy and Scott Doherty, who served as Dias's executive assistant, are both running to replace him as the union's president. Neither responded to requests for comment.

Dias, who led the union since 2013 and was reelected in 2016 and 2019, was known for being a tough, bold and audacious leader willing to go to great lengths to secure job security, benefits and rights for workers.

Dimitry Anastakis, the L.R. Wilson and R.J. Currie Chair in Canadian Business History at the University of Toronto, credited Dias with revitalizing the union and leaving it in a strong position, but said the investigation could diminish his reputation.

"It tarnishes his legacy considerably because if you've got personal scandals that are going to bring you down, all of the work that you do gets viewed in that framework," he said.

News of the investigation is particularly "disappointing" because many unions have a history of internal scandals but Dias appeared to buck that trend and was "pugnacious, down to earth and a fighter for the ordinary guy," he added.

Dias took the helm of Unifor in 2013, following the merger of the Canadian Auto Workers and the Communications, Energy and Paperworkers Union of Canada.

However, his union work began long before. The son of labour activists, Dias followed his father, who was president of the local at De Havilland Aircraft in the 1960s and '70s, into a union job. Dias took on that role in 1987.

He was a key figure during the successful negotiation of the United States-Mexico-Canada Agreement, but one of his biggest wins came in Oshawa. It was there that General Motors Canada announced it would close an assembly plant that employed about 2,600 Unifor workers by the end of 2019.

Dias was irate and called for a boycott of General Motors vehicles made in Mexico as part of a campaign to save the plant. At one point, he uttered an expletive at Ontario Premier Doug Ford, who suggested it was too late to reverse the automaker's decision.

He also shared and urged people to call Ford's personal phone number and later roped in British singer Sting to perform outside the plant in solidarity with the workers.

The efforts paid off in 2020, when in a stunning reversal, GM announced it would reopen the plant, invest up to $1.3 billion and hire up to 1,700 workers.

That year, Dias was also fighting for Co-Op Refinery worker rights in Saskatchewan with such gusto that he was arrested and faced mischief charges, after Unifor set up blockades as tensions about a pension plan festered.

Last December, Dias turned his attention to Ontario's Council on U.S. Trade and Industry Competitiveness, a task force to protect the auto industry that Ford named him to lead.

Hours before the investigation was announced, taskforce mate Goldy Hyder, called Dias a "scrapper," who "wears his heart on his sleeve."

He said he had spoken to Dias recently and was told he is determined to prevail against his illness.

Rebecca Bozzato, a spokesperson for Ontario's minister of economic development, job creation and trade, said in an email that Hyder has replaced as chair of the council on an interim basis while Dias "stepped back from his responsibilities" to "focus on his health".