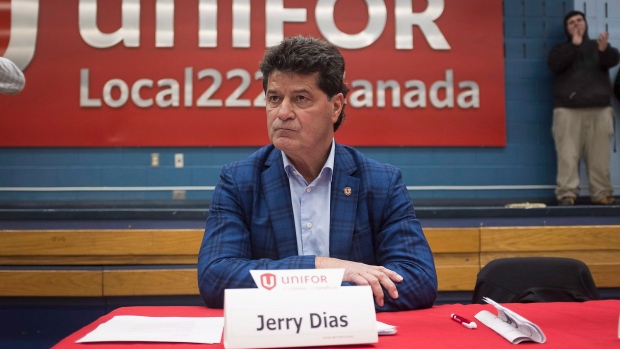 Jerry Dias, president of UNIFOR, the union representing the workers of Oshawa's General Motors car assembly plant, speaks to the workers at the union headquarters, in Oshawa, Ont. on Monday, Nov. 26, 2018. , THE CANADIAN PRESS/Eduardo Lima

Canada's biggest private sector union says it has turned money over to police that its former president allegedly accepted as part of a kickback scheme.

Unifor says acting on advice from legal counsel it delivered the money in connection with a complaint against Jerry Dias to Toronto police.

The union says it's now up to police to decide whether to investigate the matter, and it has no role in that decision and will not be commenting further.

Unifor alleged last month that its former president accepted $50,000 from a supplier of COVID-19 rapid test kits he promoted to union member employers. Several of those companies then purchased those test kits.

The union says Dias is being charged with violating the code of ethics and democratic practices of the union's constitution, and a hearing will be held before the national executive board.