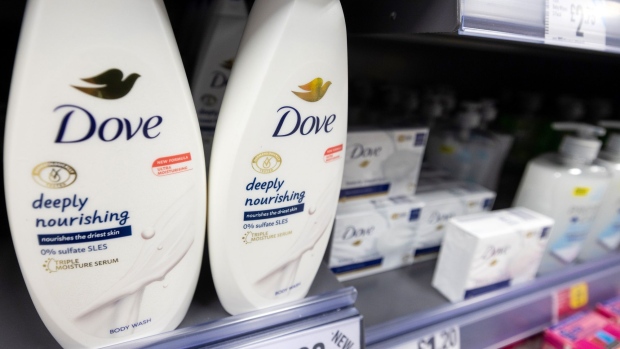 Bottles of Dove body wash, produced by Unilever Plc, at an Iceland Foods Ltd. supermarket in Christchurch, UK, on Wednesday, June 15, 2022. "Britain's cost-of-living crisis -- on track to big the biggest squeeze since the mid-70s -- will continue to worsen before it starts to ease at some point next year," said Jack Leslie, senior economist at the Resolution Foundation, a research group campaigning against poverty. Photographer: Chris Ratcliffe/Bloomberg , Bloomberg

Unilever Plc:  The consumer products company’s CEO Alan Jope will retire from the company at the end of next year.

GSK Plc: The pharmaceutical manufacturer named Julie Brown to replace Iain Mackay as chief financial officer. Mackay will step down in May next year.

Pendragon Plc:  The car retailer, received an unsolicited, preliminary and highly conditional proposal from Hedin Mobility Group AB for the entire issued and to be issued share capital at 29 pence per share

The pound plunged almost 5% to an all-time low after Kwasi Kwarteng vowed to press on with more tax cuts, stoking fears that the new Chancellor of the Exchequer’s fiscal policies will send inflation and government debt soaring.

The slump was sterling’s biggest intraday decline since March 2020, when investor panic over the then-nascent Covid-19 pandemic was roiling markets worldwide.

UK Chancellor of the Exchequer Kwasi Kwarteng pledged further tax cuts in his pursuit of growth after unveiling the biggest fiscal giveaway in half a century. Kwarteng’s package scrapped the top level of income tax and cut the basic rate by a percentage point, while also reversing a rise in the National Insurance payroll tax brought in earlier this year.“There’s more to come,” Kwarteng said on Sunday in a BBC television interview. “We’ve only been here 19 days. I want to see, over the next year, people retain more of their income, because I believe that it’s the British people that are going to drive this economy.”Finally, here’s a deep dive into Abrdn Plc — the £500-billion money manager that’s currently battling an identity crisis.

Utility network United Utilities Plc, heating and plumbing product distributor Ferguson Plc, and service provider for over-50s  Saga Plc are all due to report tomorrow as the London market starts to build up towards another earnings season.