Peltz’s Trian Fund Management has amassed a holding in London-based Unilever over the past few months, according to people familiar with the matter, who asked not to be identified because the plans are private. The exact size and Peltz’s intentions couldn’t be immediately learned.

The stock rose as much as 5.7 per cent in London, the biggest intraday gain in a year and a half.

Jope was already reeling from a failed bid for GlaxoSmithKline Plc’s consumer-health unit and faces growing calls to chart a new course. Billionaire Peltz is turning his attention to Unilever after retiring from Procter & Gamble Co.’s board in August after nearly four years that brought several dramatic changes aimed at improving that consumer-goods giant’s performance.

“The fox would now appear to be inside the henhouse,” Jefferies analysts led by Martin Deboo wrote in a note to clients. “The force and temperature of debate around Unilever now looks set to rise by several notches.”

Jope earlier this month said the consumer-goods company aims to make acquisitions in consumer health and divest underperforming businesses. Analysts have said the most likely scenarios would be a sale of ice cream brands or an entire exit from food. The other option, doing nothing, seems unlikely given the shareholder pressure.

Trian, which was co-founded by Peltz, Ed Garden and Peter May, has a history of pushing for changes at consumer companies, including PepsiCo Inc., Danone SA, Kraft Foods Inc. and others.

Peltz has a reputation for being less public about his demands than other activist shareholders. He helped push Danone to announce cost cuts in 2012. P&G shares gained 67 per cent in the period between Peltz disclosing his stake in 2017 and when he decided to leave the board in 2021. While the company didn’t meet all its demands, it did streamline its brands and structure.

Unilever shares recorded their worst weekly loss since the peak of the pandemic selloff in March 2020 after it confirmed on Jan. 16 that it offered 50 billion pounds (US$68 billion) for the GSK health-care unit, which includes brands such as Advil and Sensodyne. GSK rejected the bid as too low, and Unilever later said it had no plans to raise the offer. GSK has its own activist investor in the mix, with Elliott Investment Management pushing for changes.

Unilever had a market valuation of about 94 billion pounds based on Friday’s closing price. Its shares had declined about 6.9 per cent in a year.

CEO Jope’s public defeat came after analysts implored him not to pursue the GSK unit. Fund manager Terry Smith called the bid a “near-death experience.” Only days earlier, he had urged Unilever to focus more on fixing its own business rather than seeking to promote the sustainability ethos of brands such as Hellmann’s mayonnaise.

The Financial Times first reported the Trian stake Sunday. Representatives for the hedge fund and Unilever declined to comment. 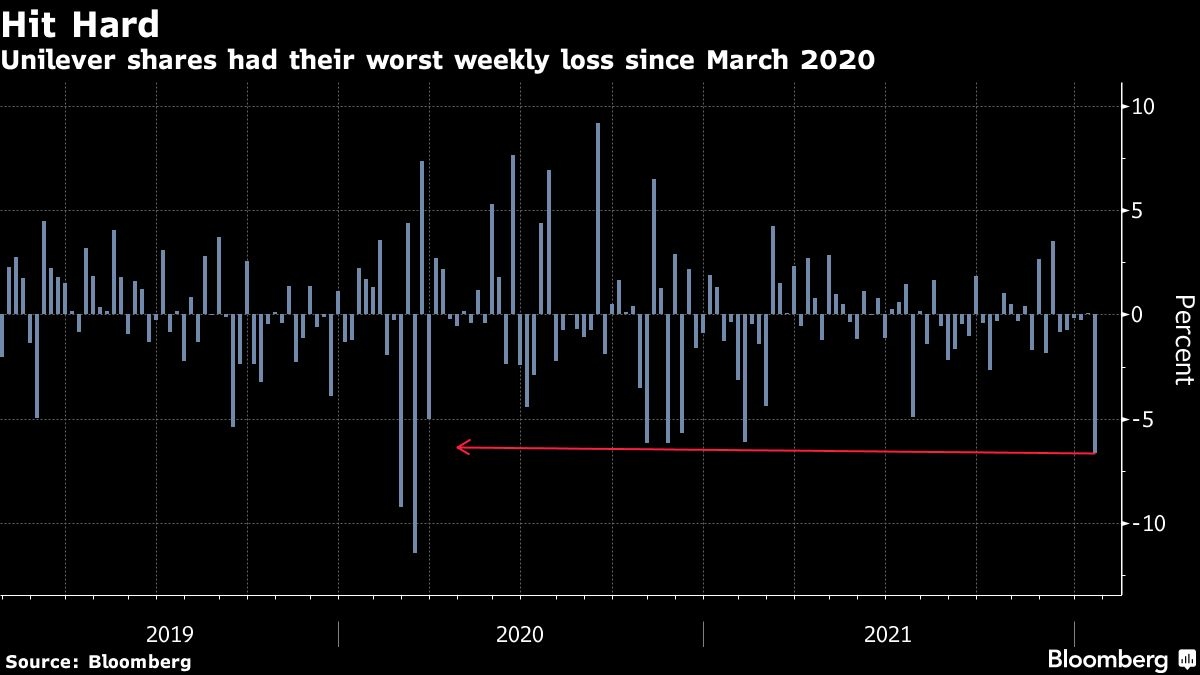 It remains to be seen whether Jope’s setback with GSK will prompt the kind of radical changes implemented at Unilever after Kraft Heinz Co.’s failed bid to acquire Unilever in 2017 for US$143 billion. That debacle led Unilever to consolidate its headquarters in the U.K., ditch a cumbersome Anglo-Dutch structure, and adopt a more aggressive acquisition strategy.

--With assistance from Rebecca Smith, Thyagaraju Adinarayan and Thomas Buckley.