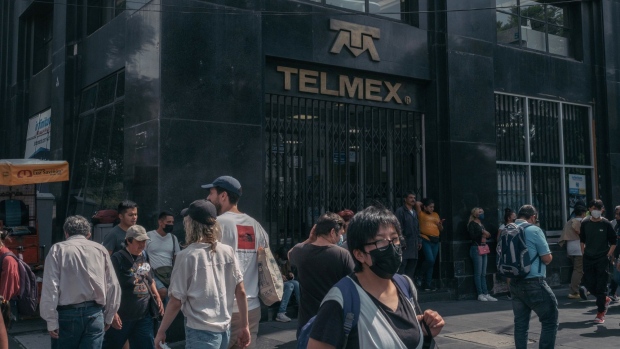 A Telefonos de Mexico SAB (Telmex) customer service center and store in Mexico City, Mexico, on Friday, July 22, 2022. About 30,000 workers at Mexico's largest fixed-line telephone and internet company agreed to go back to work Friday while the government mediates a dispute over wages, pensions and benefits, reports the Associated Press. , Bloomberg

(Bloomberg) -- The union representing workers at America Movil SAB’s fixed-line unit Telmex, which lifted a one-day strike this summer but threatens another, is willing to accept some cuts to the company’s retirement plan.

The company, controlled by billionaire Carlos Slim, could lower retirement payments to 70% of a worker’s final pay, plus benefits, for new employees, according to Francisco Hernandez, the leader of Mexico’s telephone operators union. That would be down from the current level of about 104%, he said in an interview.

But the main point of contention with Telmex is that the union wants none of the package to come from Mexico’s pensions, known as Afores, which deduct contributions from workers’ paychecks during their labor cycle to fund retirement. Retired Telmex workers currently get payments from Telmex’s own pension plan, in addition to any savings they made with Afores.

Another showdown could be imminent if an agreement isn’t reached. On July 27, almost 30,000 Telmex workers across Mexico went on a strike. While it only lasted several hours, it marked the first time Telmex’s unionized workers have walked off the job since 1985, and the first strike Slim faced since he took control of the company after a 1990 privatization.

Telmex has insisted the national Afore system must be part of the retirement plan, while Hernandez argues the amount that workers will receive from Afore investments isn’t reliable. The system, which is similar to a pension system used in Chile, has been criticized as insufficient to support workers’ retirement.

“We agree with a less expensive retirement plan, but not on the basis of Afores. That cannot be part of the agreement,” Hernandez said.

See also: World’s key workers threaten to hit economy where it will hurt

Companies have been facing an increasingly powerful labor movement in recent years. In Mexico, union activity has been bolstered by a 2020 regional trade agreement that improved worker protections. The provisions have mostly focused on the country’s vast auto industry, which led companies including General Motors Co. to agree to improve workers’ conditions at factories, but other sectors have also seen an increase in labor disputes.

Representatives for Telmex declined to comment. The company has said its proposal to the union includes bonuses for retiring workers and that new hires would get pensions worth 100% of their final net pay after Afore payments are factored into the total.

The union has disputed this. If Telmex doesn’t change its proposal during next week’s planned meeting with the Mexican Labor Ministry, the union will consider calling another strike, which Hernandez said could be protracted.

Another solution, Hernandez said, would be for the company to distribute Telmex shares to workers in exchange for part of its labor liabilities.

“He has a good relationship with him,” Hernandez said. “It’s always a disadvantage that he has the opportunity to give his version to the president and we don’t.”

AMLO, as the president is known, praised Slim at a press conference in July while Telmex workers were on strike. He also called on the company and its union to come to agreement.

Read more: Unionized Workers at Slim’s Telmex Go on Strike After No Deal

Hernandez said the Labor Ministry asked the union to make an effort to “lower their conditions.”