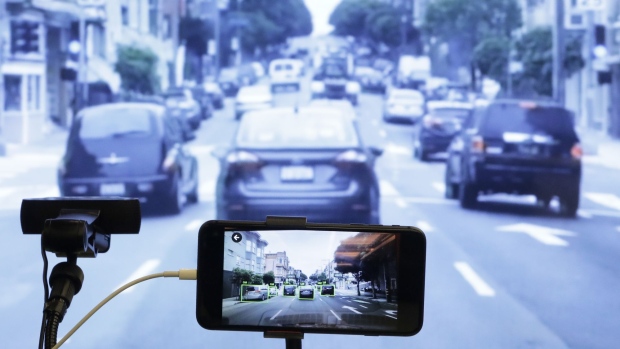 The Mapbox Inc. Vision software development kit (SDK) is demonstrated on a smartphone at the SoftBank World 2018 event in Tokyo, Japan, on Thursday, July 19, 2018. SoftBank Group Corp. and China's Didi Chuxing unveiled a taxi-hailing platform for Japan, becoming the latest venture to bet on a market that has lagged behind the rest of the world. Photographer: Kiyoshi Ota/Bloomberg , Bloomberg

(Bloomberg) -- A union drive at Mapbox Inc., which makes mapping tools used by Instacart Inc. and Snap Inc., has failed, marking a defeat for organized labor in the technology industry.

While nearly two-thirds of eligible workers had signed union cards with the Communications Workers of America, only about 40% of them voted to form the union during an election, which started about a week ago and ended late Wednesday night on the West Coast.

Under U.S. law, companies have the option to recognize a union as soon as a majority of workers have signed cards. Or, as happened at Mapbox, they can require workers to first participate in an election, during which employers often campaign against unionization.

Organizers for the Mapbox Workers Union sought formal influence amid changes at the company. In recent months, Mapbox has been in talks to go public via a special purpose acquisition company overseen by SoftBank Group Corp., and has appointed an Amazon.com Inc. alum, Peter Sirota, as chief executive officer.

“Today’s vote -- rejecting the union -- will allow us to recommit to our values and ensure that we continue to be a business that succeeds because of our diverse and innovative global team,” Sirota said in a statement to Bloomberg. “Throughout this election process, we have respected individual employees’ rights to decide if union representation is the right path forward for Mapbox.”

The Mapbox Workers Union confirmed the election results in a tweet and said, “The past seven weeks have been hard. Emotions have run high as we’ve educated ourselves, had difficult conversations with colleagues, and put our energy into building a better Mapbox - irrespective of our individual votes.”