‘There’s so much at stake here for both sides’: Canadian auto expert on GM worker strike

General Motors Co. (GM:UN)  and the United Auto Workers remain far apart in their talks over a new contract, according to the union’s top negotiator, making it less likely a strike called yesterday will end within two days like a previous work stoppage did in 2007.

“We have many unresolved issues,” Terry Dittes, vice president of the UAW, said in an interview. “It’s not just a couple of things. How long will this take? I can’t say.”

Standing at a picket line on Monday outside GM’s sedan plant in Detroit-Hamtramck, Dittes said the two sides have only settled 2 per cent of about 1,000 outstanding proposals and that there are 10 major sticking points which need to be settled, including wages for entry-level workers and treatment of temporary staffers.

Union workers walked off at midnight after GM and UAW negotiators failed to come to a new four-year agreement by a Sept. 14 deadline. The strike will cost GM at least US$50 million a day in lost earnings, according to an estimate by Credit Suisse. Shares of the automaker plunged 4.2 per cent, the biggest drop in more than a month.

U.S. President Donald Trump sought to align himself with the auto workers on Monday, telling reporters in the White House that he has a “great relationship” with them. 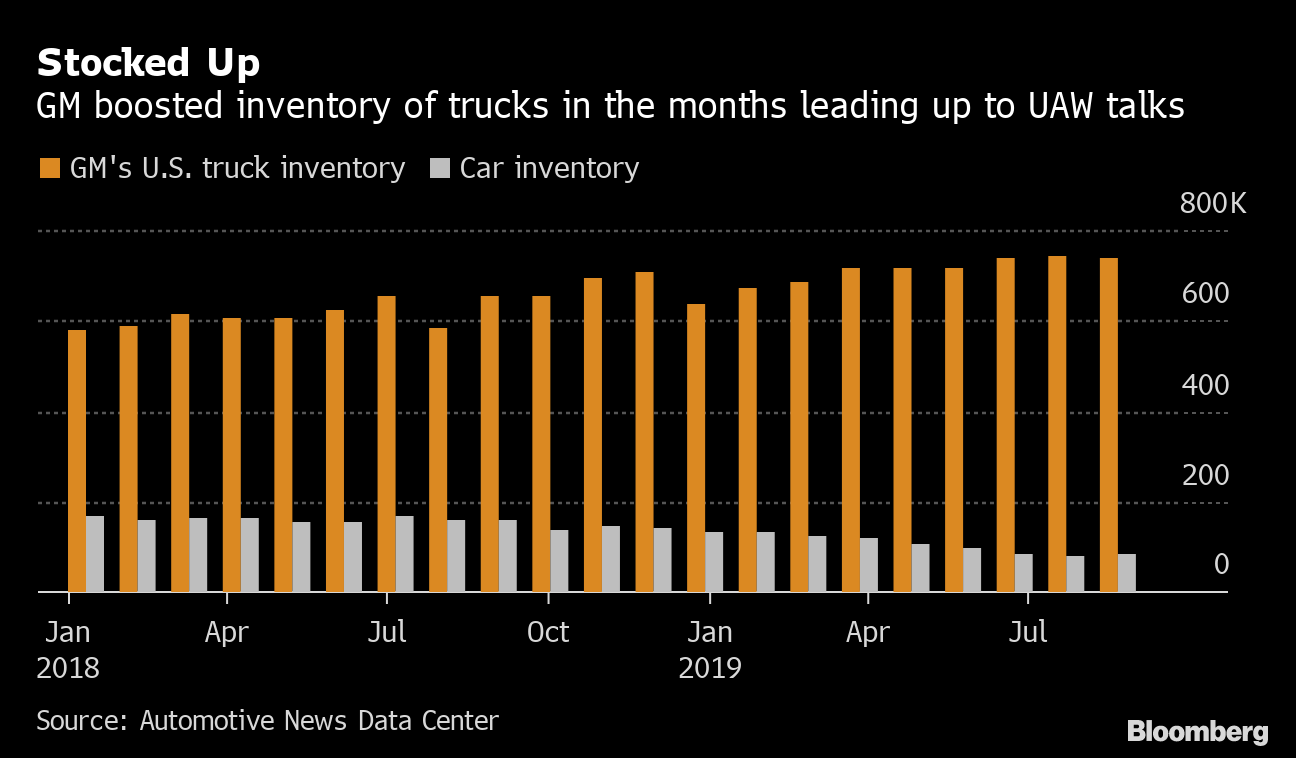 GM issued a brief statement Monday saying negotiations had resumed. On Sunday, the company outlined a contract it offered to the union and said it was “disappointing that the UAW leadership has chosen to strike.”

As part of its offer, GM proposed staggered 2 per cent lump sum payments in two of the contract’s four years and 2% raises during the other two years, said two people familiar with the matter. The union balked because that is less than the current agreement, these people said. In 2015, GM gave union workers 4% lump sum payments in two of the years and 3 per cent wage increases in the other two years.

Dittes and a GM spokesman both declined to comment on the wage offer.

But the union official said wages and a clear path to upgrading temporary workers to permanent status are two of the biggest focus areas. “Temporary workers are a big issue,” Dittes said. “We have a situation where people here in Hamtramck have worked for four years as temporary workers. We want a way to make them permanent.”

That has become a key flash point because GM wants more temps to help it weather an expected downturn. The carmaker has said its plants have an average of 7 per cent of their jobs manned by temps. U.S. plants owned by Japanese automakers can have 20 per cent temporary workers or more, which lowers their production costs and gives them more leeway to cut staff in a downturn.

The union also wants entry-level workers, who start at less than US$20 an hour, to get the top wage of about US$30 an hour in four years or less. Currently, the grow-in period for so-called “in-progression” workers is eight years.

Another hotly contested issue is the number of skilled-trades workers employed by the automaker. GM has eliminated many skilled-trades job classifications and outsourced some of the work in plants with special agreements. The UAW’s skilled-trades members want better job security, Dittes said.

Workers also want tougher job-security provisions and more investment in U.S. plants, he said, declining to comment on the investment that GM pledged in its deadline-day proposal.

GM disclosed what it called a “strong offer” that included raises, signing bonuses of $8,000 and a promise to preserve the union’s generous health-care coverage. But it did not address the issue of temps or in-progression workers.

The company’s offer promised US$7 billion in investment targeting eight plants in four different states, adding 5,400 jobs that would mostly be staffed with new hires. GM also said it plans to make batteries for electric cars using UAW workers in Lordstown, Ohio. Idling its Lordstown plant and seeking to sell it to tiny electric-truck maker Workhorse Group Inc. had infuriated the union.

While GM’s plants in Lordstown and two others in Maryland and Michigan are shut down, its Detroit-Hamtramck factory is still building Cadillac and Chevrolet sedans. As part of GM’s latest offer, that plant would get a new car to build.

Wiley Turnage, president of UAW Local 22 in Hamtramck, said a new product would be a relief for union members. Many are young and want more stability, he said, adding that he trusts union negotiators to secure work for his plant and get a good deal.

“I don’t know the details,” Turnage said. “If the offer was good enough, we wouldn’t be standing out here.”