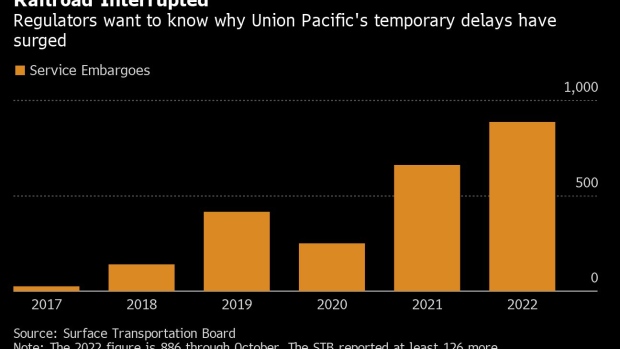 (Bloomberg) -- In this year’s first 10 months, Union Pacific Corp. imposed almost 900 temporary halts on shipments — more the other major US railroads combined — to help head off or alleviate bottlenecks. Now the nation’s rail regulator wants to know why.

Chief Executive Officer Lance Fritz is set to appear before the US Surface Transportation Board on Tuesday as it examines industrywide snarls that have bedeviled shippers, even as railroads reward investors with dividends and buybacks. Union Pacific has emerged as an outlier, with its so-called service embargoes rising to 886 through October — surging from 662 for all of last year and just 27 in 2017. Congestion was cited as the reason all but a handful of times.

“The Board has been closely monitoring UP’s recent use of embargoes and has observed a disturbing upward trend in their usage,” the regulator said in a notice for the two-day hearing. “The use of embargoes by all other Class I carriers, combined, pales in comparison to the number of embargoes issued by UP.”

Union Pacific is by no means alone — all the large railroads operating in the US have struggled with on-time deliveries in an era where the pandemic triggered labor shortages and disrupted supply chains. But Union Pacific’s interruptions “have a significant detrimental impact on the supply chain and the economy” because the company carries 27% of US rail freight and about 11% of all long-distance freight, the STB said.

The Omaha, Nebraska-based railroad counters that short-term restrictions on some traffic are needed to facilitate the movement of all traffic. “Union Pacific uses embargoes to control traffic movements temporarily when we believe they are needed to address congestion, to help customers receive shipments, and to respond to other existing or threatened physical or operational impairments,” the company said in a statement.

Even so, some rail experts and customers say there’s a self-serving aspect to some of the industry’s imposed delays, stemming mostly from a push to boost operating profit margins by cutting workforces, shuttering switching yards and parking locomotives. This month Congress intervened to narrowly avert a rail strike by workers frustrated by some of those issues.

Large railroads “have really looked after their shareholders, but not their stakeholders very well,” said Nicholas Little, managing director of the Railway Management Program at Michigan State University. “They’ve got to become more predictable. They’ve got to think of themselves as part of every customer’s supply chain.”

The result has been the railroads haul the same amount of carloads as a decade ago even as truck tonnage has grown 30%. Past promises of improved service and taking cargo off the highways have gone unfilled. While the railroads were successful at boosting profit margins, they have angered customers and rail workers — the situation that is prompting the STB to intervene.

The average carloads for the last four quarters ending in the third quarter of 2022 was 8.7 million, down from an average of 9 million a quarter in 2013, according to data from the Association of American Railroads compiled by Bloomberg. Over the last decade, the average adjusted operating profit margin for US rails jumped to 41.1% in 2021 from 29.9%. The four large US-based railroads paid out $23.1 billion in dividends and share buybacks last year, up from $9.6 billion in 2012.

Union Pacific returned $7.9 billion to shareholders in dividends and buybacks through the third quarter, executives said on the company’s earnings call in October. Its shares fell 22% this year through last week, compared with a 20% decline for the Standard & Poor’s 500 stock index.

Customers have benefited Union Pacific’s billions of dollars in investments in infrastructure, technology and efforts to reduce greenhouse-gas emissions, in a separate statement provided by spokesperson Kristen South. With the industry’s efficiency gains, inflation-adjusted freight rates are 44% lower that they were in 1981, Union Pacific said.

The lack of rail volume growth in the industry is a lost opportunity, especially as shippers focus on sustainability, Little said. That’s because trains are about four times more fuel efficient than trucks. A shift of cargo from truck to trains, which railroad CEOs have discussed for years, could also ease a truck-driver shortage and highway congestion.

The embargoes disrupt the flow of goods and can even cause factory shutdowns if prolonged, said Jeff Sloan, senior director of regulatory affairs at the American Chemistry Council. Companies are often captive to the railroad that runs near their facility and have limited options to use trucks because of the availability and cost, he said.

“Fundamentally, you have a lack of competition, so you have railroads with market power over a lot of their customers,” Sloan said.

The council is pushing the regulator to streamline rate-increase challenges and to allow shippers to force a railroad to switch its freight to another rail if close by, boosting competition.

The STB, which in January became fully staffed with five directors for the first time since Congress increased the board’s size in 2015, may be poised to spur change. The board required rails to submit weekly service reports after holding April hearings in which rail customers and workers aired complaints.

The board has broad powers to regulate the freight railroads, but that power historically has been tempered by a reluctance by the regulator to micro-manage rails, said Michael Booth, an STB spokesman. Major rule changes, though, have to follow normal regulatory processes, such as public-comment periods.

In addition to Union Pacific’s CEO to publicly explain the embargo spike, the board has asked to hear from two executive vice presidents and its vice president for customer care and support.

“We are aware our customers’ concerns, and we have taken aggressive measures to address them,” Union Pacific said in the statement, noting steps that include removing some rail cars to ease congestion, adding locomotives and expediting some hiring. “We’ve made real progress to increase network fluidity and better meet customer demand; however, we’ve been very upfront that the work isn’t finished.”

Shippers have heard promises from the industry before, the chemistry group’s Sloan said. It will take the STB to force railroads to keep them, he said: “At the end of the day, something has to change.”