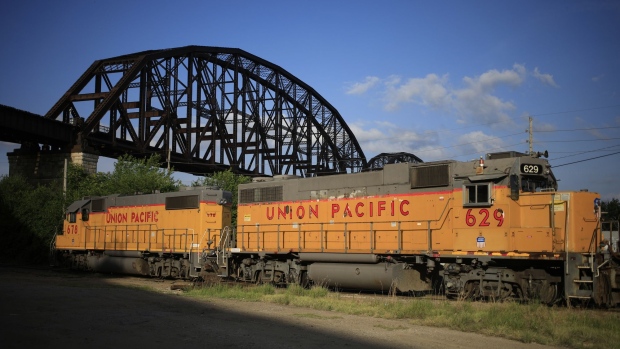 (Bloomberg) -- Union Pacific Corp.’s profit topped analysts’ estimates after the railroad boosted prices and kept costs in check while it worked to untangle supply-chain knots that have hurt carload volume and service.

Earnings were $2.66 a share in the fourth quarter, up from $2.05 a year earlier, Union Pacific said Thursday in a statement. Analysts has expected $2.62, according to the average of estimates compiled by Bloomberg. Operating revenue rose 12% on strong pricing to $5.73 billion from a year earlier, while analysts had predicted $5.59 billion.

Carload volume fell 3.9% on lower shipments of vehicles because of a chip shortage that has crimped production and fewer maritime containers as ports remain backed up. Volumes for industrial chemicals, fertilizer and coal rose. Union Pacific’s operating ratio, a benchmark measure of efficiency in which a lower number is better, was 57.4%, worsening from 55.6% a year earlier.

All the major U.S. railroads have grappled with similar challenges, causing carloads for the group to drop 3% in the final three months of the year, according to the Association of American Railroads. The companies, including Union Pacific, have been hiring more workers to deal with the congestion and to prepare for growth this year.

The company expects an operating ratio this year of about 55.5%, while analysts had forecast the efficiency measure at 55%. Capital expenditures are forecast to be $3.3 billion.

Carload volume is expected to exceed the increase of U.S. industrial production, which the company forecasts at 4.8% in 2022. Carload growth will be driven by a rebound in autos, intermodal and an increase in coal, Union Pacific said.

The railroad’s service deteriorated in the fourth quarter, with 58% of regular railcars arriving on time compared with 74% a year earlier. The poor service may hinder a push to increase volume by taking freight from trucks.

Union Pacific will get a lift on volumes after winning a contract for trucker Knight-Swift Transportation Holdings Inc.’s containerized freight business that started this year. The railroad said on Jan. 19 that it won the intermodal business of trucker Schneider National Inc. beginning in 2023.