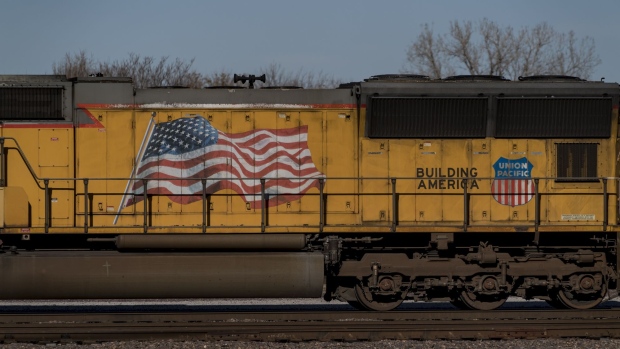 Earnings were $2.57 per share during the third quarter, higher than $2.01 a year earlier, Union Pacific said in a statement. Analysts had expected $2.51. Revenue rose 13% to $5.6 billion. Analysts had estimated $5.4 billion, according to figures compiled by Bloomberg.

The Omaha, Nebraska-based railroad hauled fewer automobiles as a global chip shortage throttled vehicle production. It also shipped fewer maritime containers because of congestion that resulted in cargo stacking up at rail yards, warehouses and ports. Still, carloads of coal and industrial goods such as steel and wood were up as the economy rebounds.

Even with the drag on freight volume, Union Pacific raised prices and cut costs to strengthen profit. Operating profit margin was 43.7% in the quarter, up from 41.3% a year earlier.

Truckers and railroads have been hampered by shipping snarls as intense demand for imported goods has run into a shortage of drivers and warehouse workers. That labor shortage has kept cargo-hauling capacity constrained and bottlenecks have formed, especially at ports and distribution centers where freight is unloaded. Railroads, which were also impacted when Hurricane Ida severed rail exchanges near New Orleans in August, have struggled with slowing average train speeds and longer times for railcars sitting in yards.

In a Sept. 9 interview with Bloomberg, Fritz said that, along with the driver shortage, the biggest pinch point is the lack of warehouse workers to unload containers to make room for even more freight that’s streaming to retailers’ distribution centers. That has created logjams that are now impacting both railroads and trucking companies.