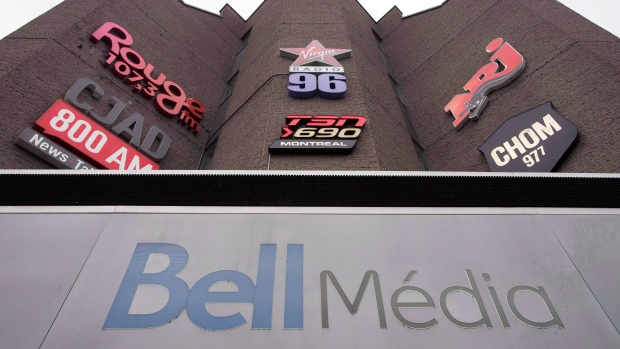 The offices of Bell Media are seen Wednesday, November 5, 2014 in Montreal. , THE CANADIAN PRESS/Ryan Remiorz

CALGARY -- The union representing some Bell Media workers says a total of 210 employees in the Toronto area are being laid off, with most of the notifications taking place Tuesday.

About 100 of the employees are union members and are connected to Toronto television newsrooms, while the non-union staff include administration and sales staff, said Howard Law, media section director for Unifor, on Tuesday.

The affected union members include field camera operators but not on-air television reporters, he said, declining to be more specific because some affected employees have not been notified yet.

"They're laying off camera operators which has to mean less news coverage, unless they expect everybody else to work twice as hard," Law said.

Some support staff are being laid off temporarily because certain local TV information shows aren't being made in-house during the COVID-19 pandemic, he added.

"There are further changes in roles, including some departures, reflecting Bell Media's streamlined operating structure," said director of communications Marc Choma in an emailed response to questions from The Canadian Press.

"As the media industry evolves, we're focused on investment in new content and technology opportunities while also ensuring our company is as agile, efficient and easy to work with as possible. That includes programming changes affecting some on-air positions, but I think it's pretty clear by now that our policy is not to comment on individual employees."

He added departing employees will be supported with retirement or severance packages and career transition support.

In a news release Tuesday, Unifor's national office condemned the cuts being rolled out to CTV newsrooms across much of Bell Media's operations, saying the layoffs will cost the network many valued media workers just when their communities need them most.

"Since the beginning of the pandemic, Canadians have seen how important a strong media sector is to their continued health and safety," said Unifor national president Jerry Dias.

"These cuts go against the assurances made by the broadcasters last summer to the CRTC (the Canadian Radio-television and Telecommunications Commission) to stand by local news."

It stated that Bell Media had laid off all of the staff in the newsroom of Montreal radio station CJAD.

Bell Media confirmed last month it had restructured its leadership team leading to some staff departures.