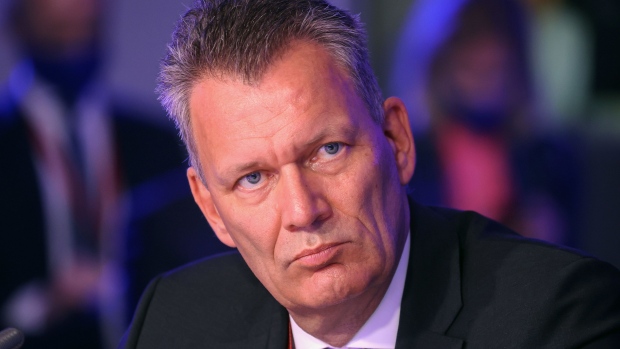 Klaus-Dieter Maubach, chief executive officer of Uniper SE, listens during a panel session on day three of the St. Petersburg International Economic Forum (SPIEF) in St. Petersburg, Russia, on Friday, June 4, 2021. President Vladimir Putin will host Russia’s flagship investor showcase as he seeks to demonstrate its stuttering economy is back to business as usual despite continuing risks from Covid-19 and new waves of western sanctions. , Bloomberg

(Bloomberg) -- German gas giant Uniper SE’s losses to replace missing Russian gas flows might reach a 7 billion euro limit this month, which would force the government to step in again to help the utility, according to chief executive officer Klaus-Dieter Maubach.

“We got the stabilization package from the government we have agreed with a 7 billion euros backstop to be reached the fourth quarter, and it will definitely be earlier,”  he said on the sidelines of the Gastech conference in Milan. “Most likely we will reach that ceiling in September already.”

Uniper received support package that could be worth 20 billion euros from the German government to prevent its collapse and a possible domino effect in the energy sector. Russian supply curtailments have forced the company to buy gas in the expensive spot market to fulfill contracts, pushing it to the edge of insolvency.

The agreement outlines that if replacement cost losses cannot be offset by operating profits from Uniper’s other businesses and exceed 7 billion euros, the German Government stands ready for further support.

Costs surged after Russia’s Gazprom PJSC announced that it had again halted Nord Stream flows indefinitely. Benchmark gas futures in Europe soared as much as 35%, as the region risks plunging deeper into a crisis.

Uniper reported a loss of more than 12 billion euros for the first half of the year, ranking among the biggest in German corporate history. Last month, it requested an additional 4 billion euros from Germany’s state-owned lender KfW after fully using its existing 9 billion-euro credit line. The payment that Uniper has applied for “has been agreed and signed” and tranches will be called up according to demand, said a Uniper’s spokesman.

“Now it is impossible to make a forecast on how the liquidity situation will develop,” Maubach said. “We have asked for additional liquidity support already and it is now on the way. And we can take it from there.”