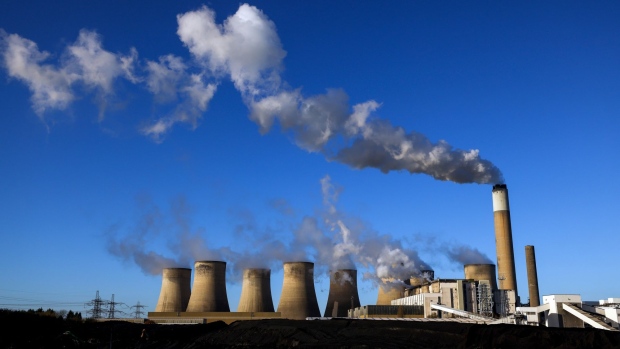 Piles of coal next to cooling towers at Uniper SE's coal-fired power station in Ratcliffe-on-Soar, U.K., on Thursday, Dec. 2, 2021. The recent drop in prices for coal and U.S. gas, as well as limited interest for LNG cargoes from some buyers in Asia, opened the way for added supply into Europe. , Bloomberg

(Bloomberg) -- Uniper SE signed a deal with National Grid Plc to keep a unit at one of its UK coal plants available for longer than planned to help keep the lights on this winter.

One of four units at the Ratcliffe-on-Soar power station in central England was due to shut permanently this month, but will now be available during the coming winter and possibly beyond, the firm said in a statement on Thursday. The other three units also remain available.

The UK has been building up a reserve of old coal-fired stations to help shore up supplies this winter. Similar deals have already been reached with Drax Plc and Electricite de France SA. Using the few coal plants that are left ahead of a complete exit from the fuel in 2024 will give the grid operator some headroom, especially on cold days when demand for gas soars to heat homes.

Uniper, which will be nationalized by the German government, already signaled in filings that it will keep Ratcliffe-1 available until September 2024, when the whole plant is due to close. The company confirmed in the statement that it was “reviewing the potential for operation” beyond this winter.

How Power Trading Tries to Keep Lights On in Europe: QuickTake

The financial deals agreed with the three generators are expected to be in the region of £220 million to £420 million, National Grid said in August.