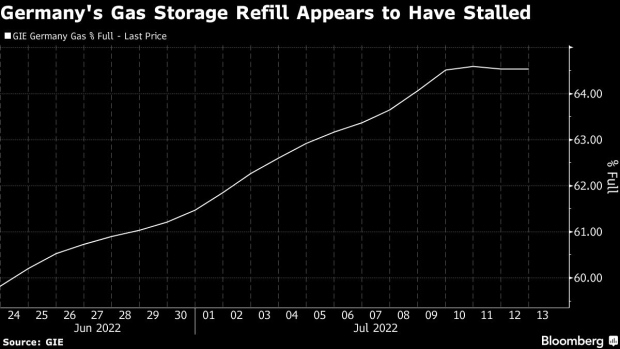 An employee monitors for gas leaks during safety checks at the Uniper SE Bierwang Natural Gas Storage Facility in Muhldorf, Germany, on Friday, June 10, 2022. Uniper is playing a key role in helping the government set up infrastructure to import liquified natural gas to offset Russian deliveries via pipelines. , Bloomberg

(Bloomberg) -- Germany’s Uniper SE has started using gas it was storing for the winter after Russia cut deliveries to Europe, increasing pressure on Berlin as the German energy giant needs to be rescued “in a few days.”

The country’s top buyer of Russian gas started withdrawing fuel from storage sites to supply its customers, the company said in a statement to Bloomberg on Friday. The drawdowns, which began on Monday, will also help the company to save some cash as it has been forced to pay up for gas in the spot market. Uniper needs urgent help, risking insolvency within days, said Harald Seegatz, deputy chairman of the supervisory board.

“We are currently reducing our own gas volumes in our storage facilities in order to supply our customers with gas and to secure Uniper’s liquidity,” the company said.

Uniper, majority owned by Finland’s Fortum Oyj, has already said it needs to be rescued by the German government, and it’s negotiating a possible stake and a cash boost. But talks have been difficult, with Berlin and Helsinki yet to agree on who to best rescue the company key for energy security.

Russia cut gas flows to Europe via its biggest pipeline last month, a move that forced Uniper and other European energy companies to buy gas at much higher prices in the open market. Faced with a shortage of cash, Uniper has been tapping gas in inventories since the start of the week, according to Gas Infrastructure Europe.

“It is clear that Uniper cannot wait weeks, but needs help in a few days,” said Seegatz, adding that insolvency can happen “within days.”

“We cannot wait for weeks to do something,” Seegatz said in a phone interview. “That would have a huge impact on the company and also on the employees. The government said it wants to avoid this situation, but the fact is that we cannot lose time.”

Chief Executive Officer Klaus-Dieter Maubach last Friday warned Uniper was not able to fill up storage anymore. He also said the company could be forced to raise prices for consumers and eventually reduce supply.

European energy companies usually store gas in the summer and use the fuel during winter, when demand for heating surges. Tapping gas in storage sites in the middle of the summer increases the risk that Germany won’t have enough supplies when it needs it the most.

It also makes it harder for the government to reach its target of filling storage sites by 90% by November. Germany has already triggered two stages of its gas emergency plan, and could enact the last step if there’s a clear deterioration in the supply picture. Such a move could force industries to ration gas.

Germany’s supply situation worsened again this week, after the Nord Stream pipeline shut for planned annual maintenance. The German government has already voiced concerns that Russia may not fully return shipments via the key link after works end next week.

Uniper’s storage sites in Germany are now about 58% full, down from about 60% reached on Sunday, according to data from Gas Infrastructure Europe. Drawdowns were also made from the company’s storage in Austria, but overall storage levels in Germany’s Alpine neighbor are still showing marginal increases.

(Updates with deputy chairman of the supervisory board comments starting in second paragraph.)