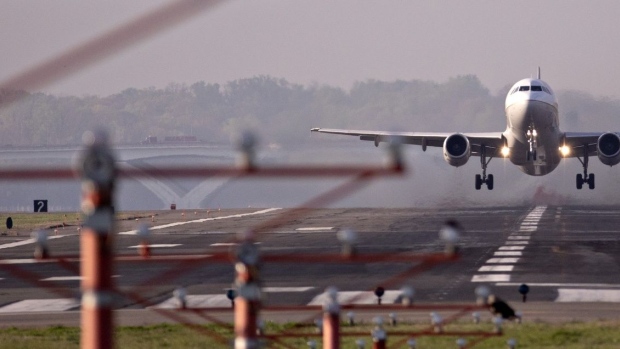 (Bloomberg) -- Amid a push by U.S. airlines to get Congress to help jump-start greater production of sustainable aviation fuel, United Airlines Holdings Inc. is slated on Wednesday to fly a jet to Washington that will be partly powered by this product.

Sustainable aviation fuel, or SAF, is a key part of major airlines’ strategy for meeting their goal of reaching net zero emissions by 2050, a transformation the industry estimates will require an enormous financial investment of more than $1.5 trillion. To convert just 10% of the global aviation fuel supply to SAF will require $250 billion in capital, United Chief Executive Officer Scott Kirby said Tuesday in an interview.

For United’s flight Wednesday from its Chicago hub to Reagan National Airport, one of the Boeing 737 Max’s two engines is expected to burn 500 gallons of the new fuel while the other engine will run on traditional jet-grade kerosene.

The flight is to carry more than 100 people, including executives from Boeing Co., GE Aviation, Virent Inc., a subsidiary of Marathon Petroleum Corp., and aviation reporters. The airline aims for the trip to highlight its campaign for lawmaker action and to demonstrate that sustainable aviation fuel works fine on existing jet engines.

U.S. regulators allow a maximum 50% SAF blend on flights, although the commodity’s paltry supplies and high costs typically keep current use far below that threshold.

The industry is relying heavily on SAF, which can be produced with a variety of materials from algae to waste cooking oils, because its combustion emissions are as much as 80% lower than those of traditional jet fuel.

President Joe Biden’s administration has challenged refiners and others in the supply chain to boost U.S. production of SAF to 3 billion gallons annually as part of its effort to cut aviation emissions 20% by 2030. To reach those goals, carriers are pushing Congress to offer subsidies and other incentives designed to spur investment and increase output. The idea is that boosting the scale of production will reduce costs, resulting in SAF prices that are competitive with petroleum.

“I have talked to a lot of people on both sides of the aisle and I don’t find anyone that’s opposed, which is good,” Kirby said. “But in today’s environment even something that no one’s opposed to doesn’t always get over the finish line.”

In another sign of the industry’s effort to ramp up use of greener fuel, American Airlines Group Inc. announced Wednesday it has reached an agreement with renewable energy company Aemetis that bumps up its commitment for SAF deliveries to 120 million gallons.