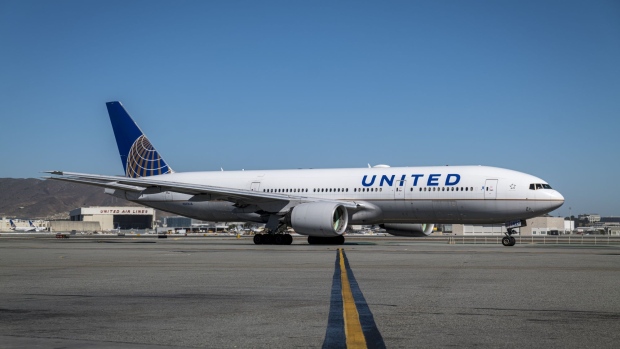 A United Airlines Holdings Inc. Boeing 777-200 aircraft taxiing on the tarmac at San Francisco International Airport (SFO) in San Francisco, California, U.S., on Thursday, Oct. 15, 2020. United and Hawaiian Airlines are offering options for Covid-19 testing to passengers traveling to the state of Hawaii that will include at-home tests, drive-through testing, and in-person tests at the airport. , Bloomberg

United is working closely with Pratt & Whitney, a division of Raytheon Technologies Corp., as well as Boeing Co. and the FAA on fan-blade inspections and looks forward “to getting that aircraft back to safe operations in the future,” Jonathan Roitman, United’s chief operating officer, said Tuesday on a call with analysts.

He said it was “too premature” to detail a schedule on when the planes might return. Pratt officials have said they’ll boost capacity at a Connecticut blade-inspection site to help speed the work, which is likely to take well into the summer.

Some of United’s 777-200s are among the first that Boeing manufactured, dating to 1995, which had sparked speculation about whether the carrier would pursue repairs or retire those jets, as some airlines in Asia have done. United took some 767-300 aircraft from storage to cover flying that the 777s had performed.

Separately, Roitman said a solution to an electrical problem identified on 17 of its Boeing 737 Max aircraft is “relatively straightforward” once the airline receives a service bulletin on the repairs. United expects those planes will return to service by month’s end, Chief Executive Officer Scott Kirby said earlier in an interview with CNBC.

A Honolulu-bound United 777 flight from Denver experienced an explosive engine failure Feb. 20 on takeoff and returned for an emergency landing. No one was injured when one of the engine’s 40.5-inch fan blades snapped, but substantial pieces of the engine were scattered on areas west of the airport.

United had about 50 of the older 777s powered by Pratt & Whitney 4000-112 engines at the time of the incident, including 19 in long-term storage, according to Cirium data.

A United spokeswoman declined to comment on whether all of the 777s would be repaired and return to the fleet. A Pratt & Whitney spokesman said the company had no immediate comment.