Run-up in airline stocks was based on a better 2021 than we'll actually see: Analyst

United Airlines Holdings Inc. expects to end a year and a half of losses this quarter despite rising investor anxiety about whether COVID-19 infections will upend a travel resurgence.

The forecast for an adjusted pretax profit in the third quarter and another in the fourth quarter excludes any benefit from billions of dollars in federal airline aid, United said in a statement Tuesday as it reported earnings. While the carrier didn’t quantify how much it expected to earn, any profit would top the second-half losses expected by Wall Street.

“Our airline has reached a meaningful turning point: We’re expecting to be back to making a profit once again,” United Chief Executive Officer Scott Kirby said in the statement. 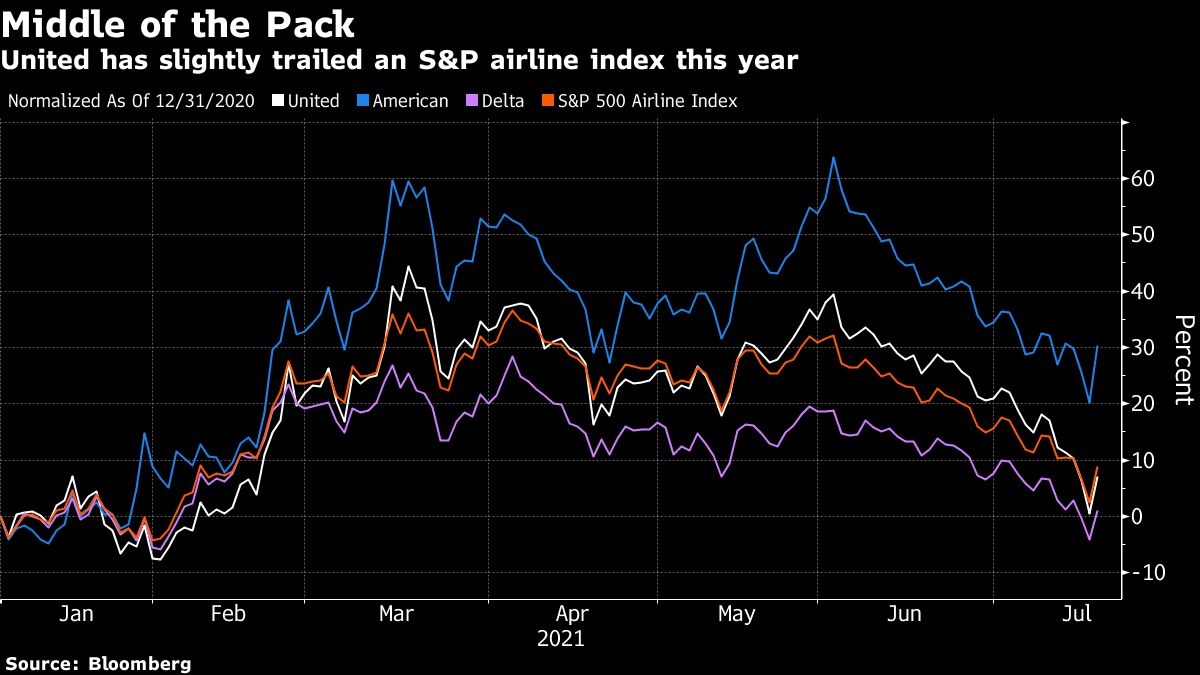 The improved outlook underscores the robust rebound in domestic travel buoying U.S. airlines, as families reunite and take summer holidays after more than a year of largely staying close to home. Yet the industry is also in a precarious position as a virulent coronavirus variant spreads in the U.S., Europe and Asia, making future demand for seats difficult to predict -- and vulnerable to infection trends.

Airline stocks have seesawed as a result, with a Standard & Poor’s index of major U.S. carriers surging on Tuesday after a tumble the day before. United gained 1.4 per cent to US$46.95 before the start of regular trading in New York on Wednesday. The stock had climbed 7.1 per cent this year through Tuesday, trailing the index’s 8.9 per cent advance.

Long-distance international flights and business travel accelerated faster than expected in the second quarter, United said. The airline expects a fuller resumption of corporate trips later this year, coinciding with the usual tapering of leisure travel in the fall. The airline sees a full recovery in 2023, it said.

Cowen analyst Helane Becker highlighted the airline’s expectations for strong recoveries in business and international traffic, plus a jump in the second quarter’s value of unused tickets, to US$6.96 billion from US$5.5 billion in the first.

That “gives us confidence United can produce strong second-half results,” she said in a note to clients.

The Chicago-based company is predicting profits even as the airline industry faces higher prices for jet fuel compared with a year ago. United said its cost per gallon rose 67 per cent in the second quarter to US$1.97.

The second-quarter loss narrowed to US$3.91 a share, 7 cents worse than the average of analyst estimates compiled by Bloomberg. Sales more than tripled to US$5.47 billion. Analysts had predicted US$5.35 billion.

United said it would fly 74 per cent of its 2019-level capacity in the third quarter. That’s a jump of 39 percentage points from the second quarter, reflecting the rebound in demand and wider border openings that have allowed vaccinated Americans to travel to Europe.