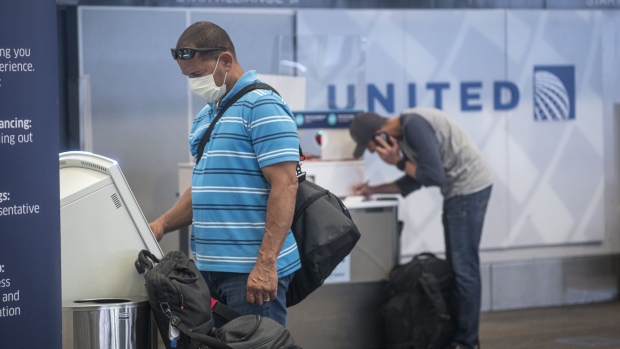 United Airlines Holdings Inc. warned employees that a jump in coronavirus infections in parts of the South and West is jeopardizing a nascent recovery for U.S. travel. The shares plunged.

United “expects demand to remain suppressed until a widely accepted treatment and/or vaccine for COVID-19 is available,” the airline said Tuesday in a securities filing, making public what it shared with employees. As of July 2, the industry’s domestic revenues remained 78 per cent below the same period of 2019 with passenger traffic off 69 per cent, United said in a slide presentation.

Bookings at United’s Newark hub were 16 per cent of 2019 levels as of July 1, or about half of what they were several weeks earlier when travel began reviving, according to the presentation. United is watching for signs of a similar drop at its Chicago hub given restrictions the city imposed last week on travelers arriving from more than a dozen states, said a person familiar with the matter, who asked not to be named because the employee discussions were private.

The resurgence of COVID-19 infections across broad sections of the nation may further crimp revenues during what is typically the airline industry’s busiest travel season. Demand had been slowly rising from mid-April, the trough of the downturn based upon daily airport security screening data, and airlines have been restoring flights based on expectations of a continued rebound.

United dropped 7.6 per cent Tuesday to US$32.55 in New York trading, the second-worst performer on the S&P 500 index. United had fallen 63 per cent this year.

The grim news on demand reinforces the company’s plan to cut tens of thousands of employees starting Oct. 1 as the pandemic continues to depress airline travel. The company may begin notifying workers — including as many as 30 per cent of its pilots corps — as soon as Wednesday. Federal law requires a 60-day notification period.

New York, Connecticut and New Jersey have imposed a 14-day quarantine requirement for travelers from 19 states, many in the South and West, such as Florida and Texas, where infection rates have surged in recent weeks. Several of those states were among the first to reopen businesses in early May, which helped fuel an uptick in new virus infections and hospitalizations.

At least 14 states have adopted two-week quarantine mandates for out-of-state visitors, Raymond James analysts wrote in a July 7 client note, adding that such rules “essentially work on the honor system.”

“While the quarantine measures are questionably enforced (if at all), the hassle and uncertainty have only added to traveler unease,” they wrote.