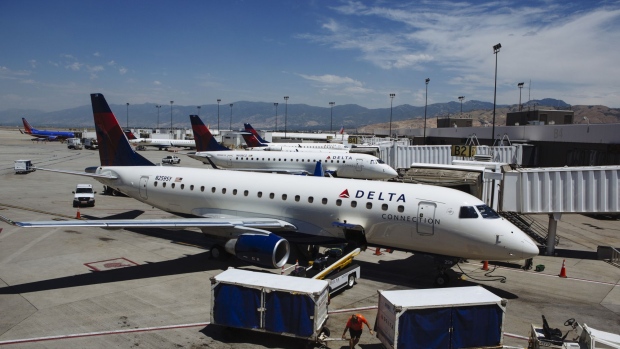 “I’ve never seen a bigger disconnect between the global headlines in terms of the economy and its potential impact on travel, and then the numbers I see here at United” in terms of future sales, United Chief Commercial Officer Andrew Nocella said Wednesday.

Other economic signals are more worrisome. U.S. retail sales slipped in September, the first decline since February, the Commerce Department said Wednesday in a report that stoked concerns about consumer spending. The Bloomberg Economics recession tracker sees a 27 per cent chance of a recession over the next 12 months.

The U.S. Federal Reserve has trimmed interest rates at its last two confabs as it tries to cushion the economy from weak global growth and trade-policy uncertainty. After the retail sales report, traders in federal funds futures increased bets that the central bank will reduce rates again at its Oct. 29-30 meeting.

An economic slowdown would eventually catch up to airlines, but the companies are showing little sign of weakness at the moment. United’s load factor, a measure of how full its planes are, was 86.1 per cent in the third quarter. Its year-to-date average is higher than in 2018, buoyed in part by the grounding of the Boeing Co. 737 Max, which has squeezed seating capacity at U.S. airlines. Delta has also been flying fuller planes.