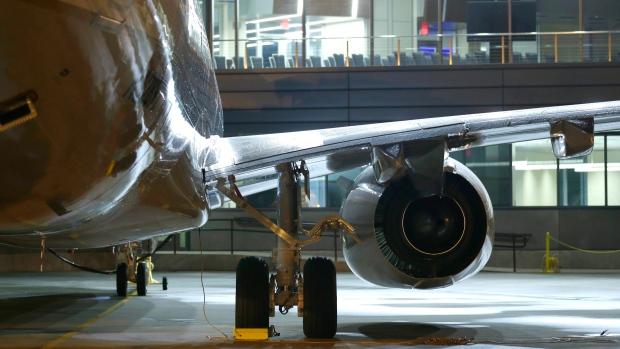 a new Boeing 737-900ER airplane being delivered to United Airlines is parked in front of Boeing's newly expanded 737 delivery center , The Canadian Press

The union for flight attendants at United Airlines Holdings Inc. says it wants a global consensus on the safety of Boeing Co.’s 737 Max before its members work again on the grounded plane.

Boeing, which has updated flight-control software linked to two deadly crashes, is working to get the plane cleared to fly by the U.S. Federal Aviation Administration by year-end. But the head of the European Union Aviation Safety Agency is targeting January for a decision.

“We’re not good with that,” said Sara Nelson, international president of the Association of Flight Attendants-CWA. “If we’re not confident it’s safe, we’re not going to work it and the planes don’t fly. We’ve been clear with the FAA, the airlines and with Boeing that we need to see that -- we need to see EASA, Canada, Australia, on board. We need all these assurances because there was a break in public trust here.”

Nelson’s stance presages a potential hurdle in restoring confidence if global regulators don’t move in tandem to lift a grounding that began more than seven months ago. Flight attendants’ unions at Southwest Airlines Co. and American Airlines Group Inc. haven’t taken as hard a line, saying they will wait to make a decision on how to proceed if the FAA approves the Max’s return to flight before other countries.

Even after the grounding is lifted, it could take airlines as long as two months to begin flying the jetliner again. So it’s possible that by the time commercial flights resume in the U.S. following FAA approval, more countries would have certified the Max. That would potentially ease the concerns about a regulatory split.

The FAA lagged behind safety agencies in other countries in grounding the Max after the second crash, which occurred March 10 in Ethiopia. In Congressional hearings last week, lawmakers questioned the close ties between the U.S. regulator and Boeing during the original certification process of the Max.

Nelson said she expected the FAA to re-certify the plane after gaining support from other regulators.

“If we have that, I believe we will have enough to assure the public that it’s safe to fly,” she said. Her union represents 50,000 flight attendants at Alaska Air Group Inc. and other carriers as well as at United.

Transport Workers Union Local 556 at Southwest and the Association of Professional Flight Attendants at American both said they would evaluate the objections of other regulators and the reasons behind them before deciding whether to staff the Max if the FAA is alone in giving approval.

“We’ll have to weigh that consideration very carefully,” said Chad Kleibscheidel, first vice president of Local 556. “But at some point we do have to rely on or have faith in the system. Whether that includes the European and Chinese counterparts, we’ll have to cross that when we get there.”

The three unions have met with Boeing and, in some cases, the FAA or other government officials, to discuss the Max accidents and the aircraft’s return. They’ve also worked within their airlines and with pilots’ unions on internal planning.

“The passengers look to us for a lot,” said Lori Bassani, president of the APFA. “Anytime when there’s even turbulence, they turn around and look at us. Passengers will take their cues from the flight attendants.”