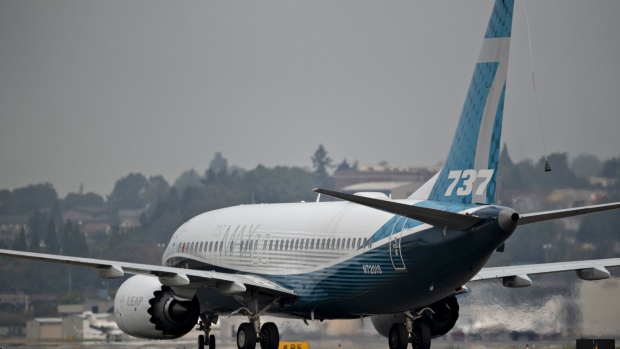 The Boeing Co. 737 Max airplane taxis after landing during a test flight in Seattle, Washington, U.S., on Wednesday, Sept. 30, 2020. Federal Aviation Administration chief Steve Dickson, who is licensed to fly the 737 along with several other jetliners from his time as a pilot at Delta Air Lines Inc., will be at the controls of a Max that has been updated with a variety of fixes the agency has proposed and may soon make mandatory. Photographer: Chona Kasinger/Bloomberg , Bloomberg

(Bloomberg) -- United Airlines Holdings Inc. is in advanced talks for a large narrow-body aircraft order that would include at least 100 Boeing Co. 737 Max jets as part of a broader fleet revamp, according to people close to the matter.

The Chicago-based airline sees an opportunity to upgrade its fleet and is studying several new, fuel-efficient models at a time when the likes of Boeing and Airbus SE are hungry for deals and demand for leisure travel is surging in the U.S., said the people, who asked not to be identified as the discussions are confidential.

Boeing’s portion of the order could include 150 Max, two of the people said.