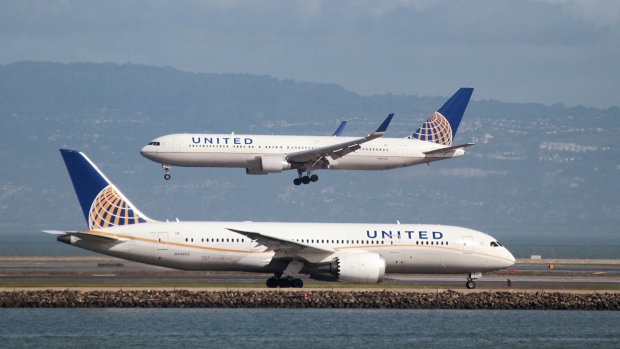 Earnings will climb to at least US$10.50 a share this year, United said in a statement Tuesday as it reported second-quarter results. That was up from the US$10 floor of the previous prediction.

United is improving its outlook less than a week after Delta Air Lines Inc. boosted its own forecast, citing robust U.S. appetites for plane trips. United is also projecting increased pricing power in the current quarter, with passenger revenue for each seat flown a mile expected to rise as much as 2.5 per cent, as the Max’s absence crimps seat supply.

The shares were little changed at US$94 after the close of regular trading in New York. United advanced 12 per cent this year through Tuesday, trailing the 16 per cent gain of a Standard & Poor’s index of major U.S. airlines.

United trimmed its full-year capacity growth to no more than 4 per cent, down from the previous range of 4 per cent to 6 per cent, owing in part to the Max’s absence. The company has removed the plane from its schedule through Nov. 3.

The Chicago-based airline also agreed to buy 19 used Boeing 737-700 aircraft, with the first deliveries expected in December. United has previously said it was searching for smaller narrow-body aircraft. It also added two used Airbus SE A319 jets during the second quarter.

The Max’s grounding has helped airlines push up fares by constraining the seat supply at a time of strong demand. But the Max is also pressuring airlines’ costs for each seat flown a mile -- a yardstick that typically rises as capacity drops. United said its per-mile cost excluding fuel will climb as much as 1 per cent this year, spoiling plans to keep the measure unchanged.

United had 14 Max planes in its fleet when regulators grounded the model in March following two deadly crashes in a five-month span. The airline had plans to expand its Max fleet to 30 by year-end.

Adjusted earnings rose to US$4.21 a share in the second quarter, exceeding the US$4.12 average of analyst estimates compiled by Bloomberg. Sales climbed 5.8 per cent to US$11.4 billion. Analysts had expected US$11.3 billion.