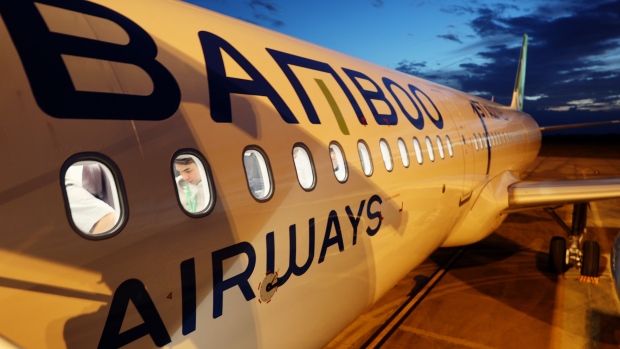 An Airbus SE A321 Neo aircraft, operated by FLC Group JSC's Bamboo Airways, stands on the tarmac on the first day of the airline's operations at Phu Cat Airport in Qui Nhon, Vietnam, on Wednesday, Jan. 16, 2019. The International Air Transport Association forecasts Vietnam will be among the world’s top five fastest-growing air travel markets in the next 20 years. , Bloomberg

United Airlines Holdings Inc. ordered its first long-range Airbus SE A321neo jets, dealing a new setback to Boeing Co. as the U.S. planemaker struggles through the grounding of its 737 Max.

The carrier said it would take 50 of Airbus’s A321XL jets, with deliveries to begin in 2024 -- a year after the model’s planned debut. Valued at US$7.1 billion before customary discounts, the order expands the U.S. foothold of a single-aisle variant capable of handling North Atlantic routes.

United plans to start replacing its Boeing 757-200 jets with the XLR, the jet closest to the U.S. manufacturer’s aging model, which went out of production about 15 years ago. Boeing has postponed deciding whether to develop a new plane of comparable size while it attempts to end the grounding of its workhorse Max, which was banned from the skies in March after two deadly crashes.

“The new Airbus A321XLR aircraft is an ideal one-for-one replacement for the older, less-efficient aircraft currently operating between some of the most vital cities in our intercontinental network,” Andrew Nocella, United’s chief commercial officer, said in a statement Tuesday.

United also said it would defer its order of twin-aisle Airbus A350 jets to 2027 “to better align with the carrier’s operational needs.”

The airline’s XLR deal is particularly noteworthy since Chicago-based United is one of the largest customers of Boeing’s 737 Max 10 planes, with 100 on order. While that Max variant is designed to haul passenger loads similar to those of the A321, it will lack the range to tackle nine-hour flights like the XLR.

American Airlines Group Inc. and JetBlue Airways Corp. have already ordered Airbus’s XLR. The European aerospace giant launched the model, its longest-range single-aisle aircraft, in June at the Paris Air Show. The plane can fly as far as 4,700 nautical miles, or 15 per cent more than the A321LR model.

United said it would employ the XLR on certain existing trans-Atlantic routes, and explore using it to serve additional European destinations from its hubs in Washington and Newark, New Jersey.

The carrier operates 75 of Boeing’s 757 jets, including the larger 757-300 model. The airline said in October that it was actively considering how to replace that part of its fleet. United has 180 of the smaller Airbus A319 and A320 models and has been scouring the used market for more A319s.