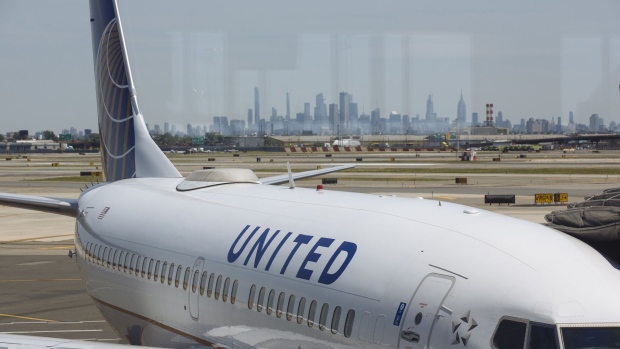 The Manhattan skyline stands past a United Airlines Holdings Inc. airplane on the tarmac at Newark International Airport (EWR) in Newark, New Jersey, U.S., on Tuesday, June 9, 2020. Airline losses are surging to unprecedented levels expected to be more than three times those following the 2008 global economic slump, according to the industry's main trade group. , Bloomberg

United Airlines Holdings Inc. will offer rapid coronavirus testing on flights to London from Newark, New Jersey, in a bid to show governments that a pre-departure testing regime can provide a way to ease strict quarantine rules.

The pilot program, running from Nov. 16 to Dec. 11, also is aimed at giving customers on the trans-Atlantic route “an added layer of peace of mind,” United spokesman Josh Earnest said.

U.S. and British airlines have been seeking government approvals for an “air bridge” between the New York City area and London’s Heathrow Airport that would relax isolation rules and spur international business travel. Corporate tickets and overseas routes are traditionally among the most profitable and have been especially hard hit during the COVID-19 pandemic.

“We’re not second-guessing the decisions that government officials are making,” Earnest said on a call with reporters. “This is not sketching out on the back of a cocktail napkin what this would look like. This is actually showing them.”

United will offer the Abbott Laboratories ID Now rapid molecular tests free for passengers booked on a Monday, Wednesday or Friday flight. The program is for one United flight and will be conducted in a terminal lounge at Newark-Liberty International Airport, outside New York. Results from the test, the same one United uses for international crews, will be available within 20 minutes.

Passengers who test positive won’t be allowed to board, and a negative result won’t exempt the traveler from the U.K.’s 14-day quarantine. Customers who don’t want to participate will be rebooked on another flight.

United is betting that a free, fast coronavirus test could stimulate travel or lure customers from another airline. The 318-seat Boeing Co. 787-10 that’s used on the United flight has been operating with 50-100 passengers, Earnest said.

The Chicago-based carrier began offering US$250 virus tests this month in San Francisco for flights to Hawaii after the state allowed travelers with negative results to skip a two-week quarantine on arrival. Hawaii expanded that program on Tuesday to visitors from Japan.