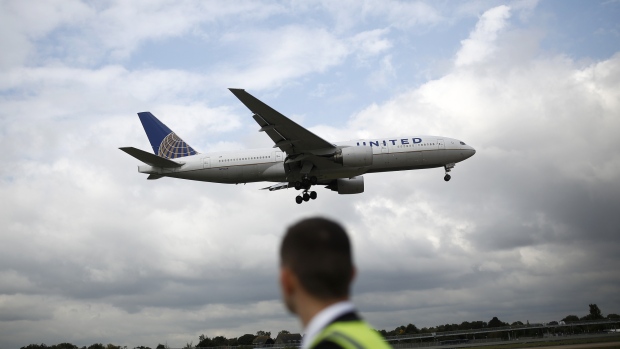 A passenger aircraft, operated by United Continental Holdings Inc, prepares to land as a ground crew member looks on at London Heathrow airport in London, U.K., on Friday, Oct. 7, 2016. Europe's busiest hub is stepping up its pitch for a new runway with a much-delayed U.K. government decision on where to locate additional flight capacity for southern England likely to announced in the coming weeks. , Bloomberg

Earnings will climb to at least US$11.25 a share this year, United said in a statement Tuesday as it reported third-quarter results that showed robust demand for summer travel. The new outlook is 75 cents a share higher than the forecast from July, when United also raised its expectations for this year’s performance.

The carrier is reaping the rewards of a turnaround plan it set out in January 2018, which called for aggressive growth to boost connecting traffic and profitability at hubs in Chicago, Houston and Denver. In 2020, United said earnings are poised to “meet or exceed” the target of US$11 to US$13 a share, the upper end of the target established last year by Chief Executive Officer Oscar Munoz.

United rose 2.2 per cent to US$89.81 after the close of New York trading. The shares have advanced 5 per cent this year, trailing the 6.9 per cent gain of a Standard & Poor’s index of major U.S. airlines.

Non-fuel costs for each seat flown a mile are expected to rise 1.2 per cent this year, United said, surpassing the 1 per cent target for so-called unit costs. The Chicago-based airline blamed the increase on the grounding of Boeing Co.’s 737 Max and separate flight reductions made in response to political tensions in India, Pakistan and Hong Kong.

Delta Air Lines Inc. disappointed investors last week when it said unit costs would rise next year as much as a full percentage point more than its long-term goal of no more than 2 per cent.

United’s adjusted earnings rose to US$4.07 a share in the third quarter, topping the average estimate of US$3.97. Sales rose 3.4 per cent to US$11.4 billion, in line with estimates.