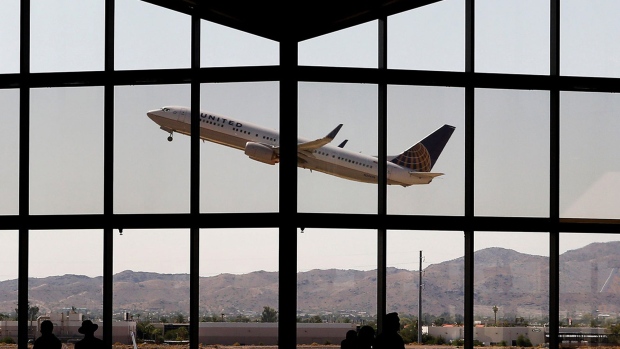 United Airlines Inc. today pledged to reduce its greenhouse gas impact to zero by 2050 — a necessary step to to avoid climate catastrophe, scientists say — while walking away from a practice increasingly common among large global companies. “Carbon offsets,” or credits generated by forest conservation or other means, can be purchased in markets or privately to cancel out emissions. Chief Executive Officer Scott Kirby said the practice can’t scale up to solve the climate problem in the way many are expecting it to.

Instead, United’s multimillion-dollar investment in 1PointFive, Inc., a venture of Occidental Petroleum Corp. and Rusheen Capital Management, relies on what’s called direct-air capture, or facilities that draw CO₂ out of open air so that it can be disposed of underground. Carbon Engineering Ltd., a Vancouver company, developed the technology.  United’s contribution to the initiative is expected to draw as much CO₂ out of the air every year as 40 million trees do. The project has been in the works since before the pandemic.

Aviation faces unique difficulties in carbon-cutting. Unlike electricity, which can be produced with renewable power, or road vehicles, which can be electrified, jets require jet fuel. CO₂ emissions from this fast-growing sector make up about 2 per cent of global greenhouse gases. What’s worse, emitting CO₂ isn’t even aviation’s biggest contribution to climate change, which includes contrail clouds that, left in a plane’s wake, help trap heat at the Earth’s surface — a headache for another day.

United, despite unprecedented losses during 2020, has the resources to address emissions more directly than by purchasing offsets. “Part of the reason others haven’t done it is because it does cost money to do this,” he said. “If instead you can write a check to an NGO, and say you have offset all your carbon by writing a check, that’s been historically an easier way to get there.”

Today’s announcement doubles down on the company’s 2018 pledge to halve emissions by 2050. Kirby, who took the helm of the company in May, said he has over time come to believe that there are three elements to a strategic climate fight. There’s renewable energy, which is now economically competitive in much of the world. There’s sustainable fuel, which United put US$40 million into last year and has used where it can at least since 2016. And there’s capturing CO₂ and storing it underground.

The airline currently offers a way for business travelers to offset the emissions related to  their flights — and will continue to do so. There’s a reason these two positions aren’t mutually exclusive, Kirby said. There are plenty of quality offsets programs around the world, just not enough to compensate for the emissions from all the companies that want them to. Investing in direct-air capture, the logic goes, allows United to become an early champion of a technology that may become less expensive and more common as years tick by.

“We're going to still be emitting carbon,” he said. “It's not possible to get actual carbon emissions to zero. And so the only way you can stop and reverse this is through direct air capture and sequestration. And that has seemed obvious to me for a long time. I think it is obvious to anyone that takes the time to understand the science and understand the math.”