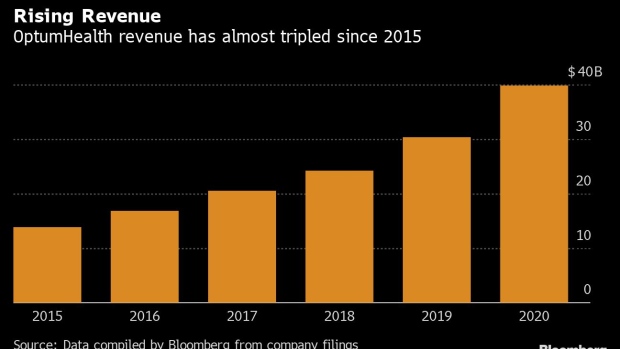 The Boston nonprofit, which provides medical services for one in 10 people in the state, booked a small loss in 2019. With more than 700 doctors and 745,000 patients, the group has a track record of providing efficient care. Yet an audit prepared last April, as the pandemic was emptying clinics, warned that the company was conserving cash and seeking new credit lines to prepare for the hurt that Atrius expected 2020 to bring.

Independent doctors were in decline before Covid, as high administrative costs and weak negotiating leverage favored tie-ups with big health systems. Then, the pandemic pushed up expenses for protective gear and dented revenue as patient visits dropped off. The combination could steer more practices into the arms of deep-pocketed suitors.

Physician practices that need capital often find big hospital systems to be eager buyers, and Boston has plenty. Atrius, though, has agreed to be acquired by another health-care powerhouse: UnitedHealth Group Inc.’s OptumHealth unit.

The health-care conglomerate that owns the biggest U.S. medical insurer, UnitedHealthcare, has assembled one of the country’s largest collections of doctors -- more than 53,000, or about 5% of U.S. physicians. UnitedHealth wants to add at least 10,000 this year, and if regulators clear the proposed deal, Atrius’s 700 doctors and primary-care providers will be among them.

Atrius made the announcement in a statement Tuesday, without disclosing terms. UnitedHealth didn’t comment. A spokeswoman for the Massachusetts attorney general said regulators have received an informal notice of the transaction and have begun a review. The AG must approve the non-profit’s conversion to a private entity.

Such deals have turned UnitedHealth’s OptumHealth division into an increasingly important part of the parent company’s business. OptumHealth’s operating revenue has roughly tripled since 2015 to almost $40 billion last year -- greater than that of 85% of companies in the S&P 500 -- and it contributed $3.4 billion to UnitedHealth’s operating profit.

Optum plans to expand the existing practices organically. “We also have a pretty well-oiled machine that brings on practices that want to join us, either as affiliates, so we can keep doctors independent if that’s important to them, or as employed physicians through acquisitions,” Wyatt Decker, chief executive officer of OptumHealth, said in an interview before the Atrius deal was announced.

More practices may be on the market amid the pandemic. “It definitely has stressed even the largest physician groups,” said Lisa Bielamowicz, co-founder of consultancy Gist Healthcare. The fallout will bring more opportunities “for health plans, health systems and others to continue to aggregate physicians,” she said.

At the same time, fewer groups the size of Atrius remain for Optum to add hundreds of physicians in a single deal. “There is a shrinking list of these megapractices,” Bielamowicz said.

Yet more than any of its rivals, UnitedHealth has bet on owning medical providers, including outpatient surgery centers, urgent care clinics and primary care practices that span 44 states. UnitedHealth says it’s essential to the company’s mission to create a “next generation health system” that offers better care at lower costs.

“The reason it’s been so hard to make health care and the health-care system work better in the United States is because it’s rare to have patients, providers -- especially doctors -- payers, and data, all brought together under an organization,” said Decker, the OptumHealth CEO. “That’s the rare combination that we offer. That’s truly a differentiator in the marketplace.”

Decker said physicians are burned out from administrative work, a burden Optum eases with software and services that let doctors focus on treating patients. The company encourages payment arrangements that tie revenue to long-term patient outcomes, rather than reimbursement for individual tests or procedures. More than four million Optum patients are in such arrangements, including some insured by UnitedHealthcare and more than 80 other payers that Optum physicians contract with.

The changing payment structures have helped OptumHealth more than double revenue per patient over the past five years. In value-based arrangements, physicians collect a larger up-front fee for each patient but take on some risk if patients’ overall cost is greater than expected. UnitedHealth says its Optum practices are well-positioned with such incentives.

Last year the company bought CareMount Medical group, with 650 doctors and advanced practice professionals in 45 offices mostly north of New York City. It already has two other large groups in the New York metro area. The company made recent deals to expand its presence in California and the Pacific Northwest, Dave Wichmann, UnitedHealth’s recently retired chief executive, said on an earnings call in January.

More acquisitions are in the works: The company had $13 billion committed for recent purchases that have not yet closed, it disclosed in its annual report filed March 1.

Those include data and payments firm Change Healthcare Inc., valued at $8 billion, and other targets the company did not specify. Another pending deal for in-home care provider Landmark Health is under review by the Federal Trade Commission, according to a person familiar with the situation. Landmark declined to comment.

“The market seems to continue to gravitate toward” an Optum model, Wichmann told investors. He said expanding the company’s physician presence would be a focus for the next five to 10 years. Wichmann’s successor as CEO of the parent company, Andrew Witty, was CEO of Optum before the promotion, and he continues to hold that title.

Physician practices, especially primary care groups, are often the front door to the health-care system. The decisions that doctors make influence patients’ future care. For that reason, they’re coveted assets for hospital systems that want to steer more patients to their facilities.

That kind of consolidation has drawn scrutiny from economists and regulators. In January, the FTC said it would study how mergers among physician groups and health facilities “affect the proper functioning of health care markets.”

UnitedHealth has rarely encountered resistance from regulators as it assembled its health-care delivery assets, though in 2019 the FTC forced divestitures of some providers in Las Vegas before approving a broader deal.

In Massachusetts, a history of health industry consolidation has led authorities to scrutinize deals. The attorney general and a group known as the Massachusetts Health Policy Commission will assess Optum’s proposed acquisition of Atrius.

“It is the largest independent physician group,” commission member Chris Kryder said at a public meeting in January. Vertical integration with a subsidiary of UnitedHealth “creates potentially an opportunity to see competition like we haven’t seen before in a market that is dominated by the not-for-profit insurers,” he said.

The question of how UnitedHealth’s physician assets relate to its health insurer is complicated. OptumHealth physicians also contract with UnitedHealthcare’s rivals, while UnitedHealthcare patients see Optum competitors. The company says that while the two entities work together to improve patient care, they maintain clear boundaries.

“We are super strict between our two shops, UHC and Optum,” Decker said. “When it comes to things like contract negotiations, various rate conversations, we have completely different systems and no communications between the two entities.”