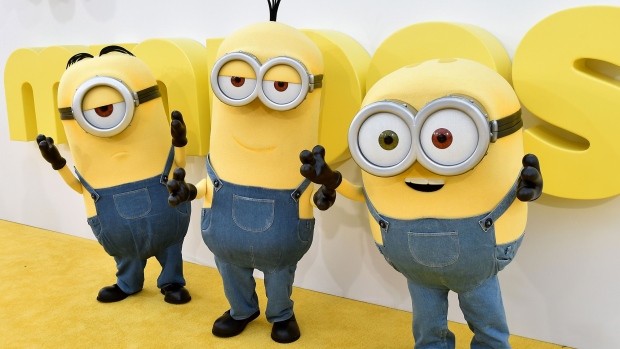 Premiere of Universal Pictures and Illumination Entertainment's "Minions" at the Shrine Auditorium in Los Angeles, in 2015. , Photographer: Kevin Winter/Getty Images

NBCUniversal is pulling its Universal films from HBO and will make Peacock their online home after they play in theaters, an effort by parent Comcast Corp. to boost its year-old streaming service.

The arrangement announced Tuesday takes effect next year and will include titles from NBCUniversal’s film studios, including Focus Features, Illumination and DreamWorks Animation. Next year’s slate includes the latest Jurassic World film, a new movie from director Jordan Peele and the next installment in the Minions franchise.

The deal is the latest in a flurry involving Hollywood studios and streaming services as they all look to take advantage of a shift by consumers to online viewing. The industry’s biggest players -- Walt Disney Co., WarnerMedia and NBCUniversal -- are directing more of their films and TV shows to benefit their own streaming services.

Disney, an early believer in streaming, let its deal to show films on Netflix expire so they could move to its own Disney+ service.

Bloomberg News reported in March that NBCUniversal was considering pulling its movies from HBO Max and Netflix Inc. and keeping future film releases for Peacock.

Universal has deals with theater chains that allow the studio to market movies for home viewing as soon as 17 days after their theatrical release. Under those agreements, a Universal movie that generates less than US$50 million in its opening weekend can be made available for rental, or what’s called premium video-on-demand, after 17 days in theaters. Films that generate more than US$50 million can be made available after 31 days.

Universal movies would then typically go to HBO about seven or eight months after their theatrical debut.

Starting next year, when the HBO deal ends, Peacock will get these movies no later than four months after they premiere in theaters. The films will only be available to subscribers of Peacock’s premium tiers, which cost US$5 a month with some ads and US$10 a month without. They won’t be available on the free version of the service.

Peacock will show the films exclusively for the first four months and last four months of an 18-month window. The films will be licensed during the middle of that stretch to another media company that wasn’t announced.

Netflix has a deal for animated films from Illumination Entertainment, the studio behind the “Despicable Me” features, and Universal could still renew that deal.

The complex arrangement is an example of how Comcast is trying to expand Peacock’s film catalog while not entirely giving up revenue from licensing films to other services.

Separately, Universal announced it will produce some original films exclusively for Peacock starting next year.