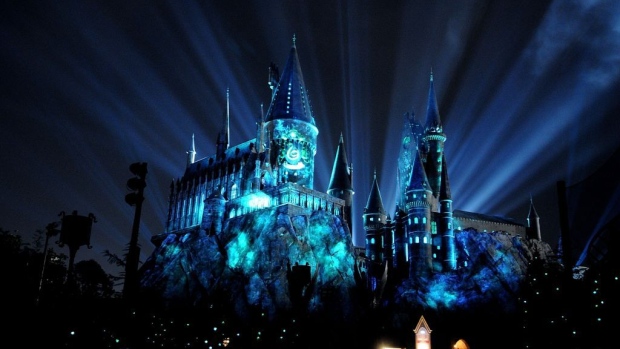 (Bloomberg Opinion) -- Walt Disney Co. and Comcast Corp.’s Universal are going to a lot of trouble to get their U.S. theme parks back open. But when they do, it doesn’t sound like anyone is going to be having much fun.

Universal Orlando presented plans for its June 5 reopening to local Florida county officials detailing how the park will try to keep employees and visitors safe from the Covid-19 virus. Its efforts begin right in the parking lot, where the spots will be staggered so that even cars are social distancing from one another (and no valet). From there, anyone entering the park must wear a protective face covering and have their temperature checked by a worker sporting a handheld thermometer. Crowds will be controlled. Even rides will keep every other row clear of passengers.

But it’s the wait for the ride that will feel especially strange: The healthy jitters of thinking about the first drop may be replaced by either the unnerving feeling of wearing a mask or the simple annoyance of it. After all, Orlando was 95 degrees Thursday afternoon. (Workers will get more frequent breaks so that they can wash their hands and, if there’s an open area, to take off their mask for a breather. )

Universal’s plans — which were approved by the county task force without any pushback — reveal how every portion of the day will be slightly tainted by this new reality. It could make for an almost eerie experience, or at least one very different from the vacation most families probably envisioned when they shelled out $119 a ticket. Some of these measures may not even do much good: As we’ve all learned in recent weeks, not everyone infected with Covid-19 gets a fever, and in fact, many don’t.

Eating will be an interesting experience: Universal realizes that you can’t exactly lick a Butterbeer ice cream cone with a mask on, so it’s spacing out tables to allow people to remove their masks while they eat. Good luck to parents getting the masks back on their kids after that and to the workers who must clean those tables. (The menus will at least be disposable.) Meanwhile, other changes aren’t so bad: Universal is encouraging contact-less payments, and there will be lots of hand-sanitizer dispensers. It’s also making use of virtual lines for more of its attractions so that people aren’t physically standing together for long periods, and it’s eliminating single-rider lines so that groups aren’t paired with strangers.

In theory, it’s a carefully constructed plan by Universal to make the best of a terrible situation. In practice, it could prove to be a logistical nightmare that’s difficult to enforce. The internet is full of videos of Americans defying mandated face coverings and lashing out at these types of restrictions. John Sprouls, the head of the resort, said so far guests have signaled that they are understanding and accepting of the boundaries. But there’s always one — and in a park of thousands, perhaps more. Sprouls said it would be a “capacity-managed” opening, but didn’t specify how many people would be allowed in. Universal will “stress” its system on June 3 and 4 by opening to select invited guests.

It’s unclear how much all these new safety protocols will cost Universal and Disney, which is also working to reopen its Orlando resort after welcoming back guests to its Shanghai park on May 11. The added safety and security expenses combined with intentionally selling fewer tickets will crimp profits for these companies. To what extent remains to be seen. For them, from a financial standpoint, it’s certainly better than having the parks shut down. For visitors, though, a trip that’s supposed to provide a fun escape from reality may instead be a reminder of it.